Detectives have announced that the attack on would-be mayor of Cologne Henriette Reker had a racist background. Reker was attending an outdoor campaign event when the assailant attacked her and four other bystanders. 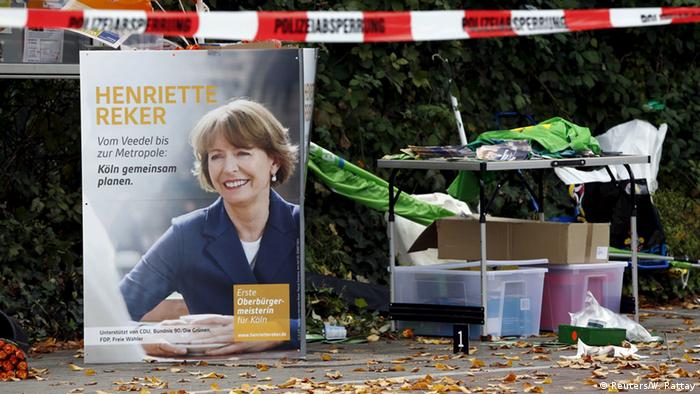 Police in the German city of Cologne confirmed on Saturday that the earlier knife attack against mayoral candidate Henriette Reker was indeed motivated by anger at her pro-refugee stance. The 58-year-old Reker, an independent, was stabbed and seriously injured while visiting an outdoor market on the campaign trail.

Reker's work in the social services department of the city government entailed organizing accommodation for refugees in Cologne.

Senior Public Prosecutor Ulf Willuhn explained at a press conference that "at the current moment witness statements indicate" that the attacker's "xenophobic motives" were the cause of the incident. He added that investigators had not ruled out mental instability on the part of the 44-year-old assailant.

He was arrested at the scene and told police he was an unemployed painter and varnisher and had been living off welfare payments.

Election to go ahead

The city's electoral commission announced that Sunday's election would go ahead as planned, as Reker was in stable condition following surgery for what was described as serious neck wounds.

"She is currently stable, but not out of the woods yet," said Cologne Police Commissioner Wolfgang Albers.

At least one of Reker's campaign staff was also injured at the weekly market held in the Braunsfeld neighborhood of Cologne, one of a total of five victims. Politicians and religious leaders have condemned the attack, while Chancellor Angela Merkel called the local office of her Christian Democratic Union (CDU), who had put their support behind Reker, to offer her best wishes for a quick recovery.

An independent candidate to be mayor of Cologne has been severely injured in a knife attack. Police said four other people were hurt at the scene, and a suspect was taken into custody. (17.10.2015)

IS: Syrians seek refuge in Germany

A growing number of Syrians are fleeing from IS. The Suleiman family wants to escape to Germany. (17.10.2015)