At Vienna EU summit, Merkel calls for rejected asylum-seekers to return to home countries | Germany| News and in-depth reporting from Berlin and beyond | DW | 24.09.2016

European leaders met in the Austrian capital to find a common solution to the wave of migration to the continent. Germany's chancellor has proposed accords to return rejected asylum seekers to their countries of origin. 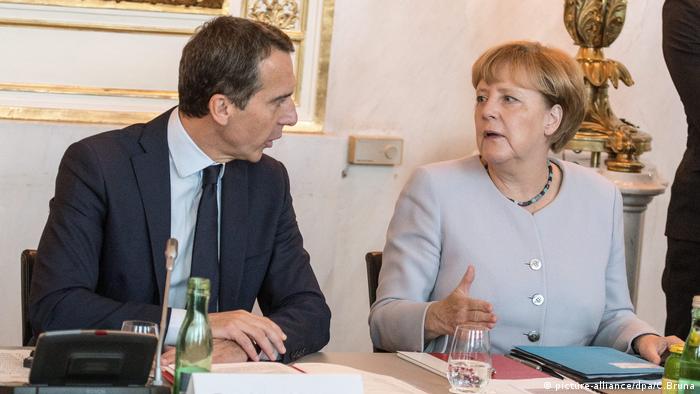 Embattled both at home and in the wider European Union (EU) for her migration policy, German Chancellor Angela Merkel suggested on Saturday that Europe contend with the crisis by making deals with third countries to send back migrants who are denied asylum.

Merkel spoke to reporters in Vienna, where she was attending a summit for leaders along the Balkan route for refugees traveling from eastern to western Europe. The German leader said it was incumbent upon EU leaders to "stop illegal immigration while living up to our humanitarian responsibilities."

In order to achieve this, Merkel said, "it is necessary to get agreements with third countries, especially in Africa but also Pakistan and Afghanistan... so that it becomes clear that those with no right to stay in Europe can go back to their home countries."

Meeting in Vienna to address the changing nature of the crisis were leaders from Germany, the EU, Albania, Bulgaria, Croatia, Greece, Macedonia, Romania, Serbia and Slovenia.

The EU's deal with Turkey on the management of migrants coming from North Africa and the Middle East, was one of the three main goals agreed on at Saturday's talks, according to Austrian Chancellor Christian Kern.

Following Merkel's comments, Kern added. "The redistribution issue was discussed, but I am convinced that we will make progress on that when the first two things are solved, namely building up border protection (and) building appropriate support structures in countries of origin," Kern said.

Ahead of Merkel's statements, European Council President Donald Tusk demanded reassurances that the route used by a million migrants in 2015 to reach wealthier EU nations through the western Balkans was closed "for good."

"Since the first days of the migration crisis, I have had no doubt that the main key to its resolution is restoring effective control of the EU's external borders," Tusk said in a statement upon arriving at a high-profile summit in Vienna.

"Obviously, an essential precondition for achieving this goal is close cooperation with our partners in the Balkans and Turkey," he said. "(But) we need to confirm - politically and in practice - that the Western Balkan route of irregular migration is closed for good."

Hungarian Prime Minister Viktor Orban said there was a need to make preparations in the event of problems: "We must have a second plan for the eventuality that the EU-Turkey deal, for whatever reason, collapses," he told a news conference. "When the migrants descend on us and trouble arrives it will be too late to reach for blueprints, for fences, for physical barriers, for new police and soldiers."

While Germany is still set to process over a million asylum applications in 2016, the number of migrants traveling through the so-called Balkan route has dwindled to a trickle after Austria pressured countries to close their borders to asylum seekers.

But the route's closure has shifted migration from the Aegean Sea to the central Mediterranean, with Italy receiving more than 110,000 migrants in 2016, many arriving via Libya. Nearly 3,000 people have died attempting the dangerous voyage.

A state attorney general has said he wants to seize records from the Federal Migration Office over the possible use of fake passports by refugees entering Germany. The issue has stirred tensions in Merkel's coalition. (17.09.2016)

Thousands of people have been left virtually homeless following a blaze at the Moria refugee camp. Observers say the incident exposes Europe’s deficiencies in dealing with the crisis. (20.09.2016)

The situation on Lesbos remains desperate for refugees following violence and a fire at the Moria detention center. Marianna Karakoulaki and Dimitris Tosidis report from Mytilini. (21.09.2016)