At runoff polls, Poles vote for Duda over Komorowski 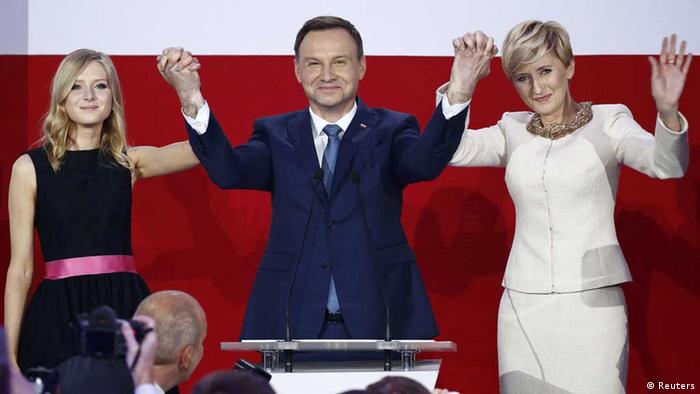 Duda, 43, ousted Civic Platform (PO) incumbent Bronislaw Komorowski in Sunday's runoff. The member of the European Parliament for the right-wing euroskeptic Law and Justice Party (PiS) secured about 53 percent of the vote in an election in which turnout reached 56 percent.

"Those who voted for me voted for change," Duda said late Sunday. "Together we can change Poland."

Poland's Roman Catholic church congratulated Duda, whose opinions on many issues fall in line with conservative religious thought. The former justice minister and member of national parliament promised increased social spending, earlier retirement and lower taxes. Duda has called for NATO to station troops in Poland as protection against Russia and cautioned against entering the eurozone, saying the country should only do once currency's debt woes have passed.

Two weeks ago, Duda scored a one-point victory in the presidential poll's first round. The president since 2010 and a former defense minister, Komorowski, had the support from Polish-born former US national security advisor Zbigniew Brzezinski, as well as celebrities.

"I congratulate my rival, Mr. Andrzej Duda and I wish him a successful presidency because I wish Poland well," Komorowski told supporters in Warsaw late Sunday.

In autumn, Poles will return to polling booths in autumn to decide the makeup of the next parliament. PiS leader Jaroslaw Kaczynski - prime minister from 2006 to 2007 - hopes to return to government.

Komorowski beat Kaczynski in the 2010 presidential election. Kaczynski's brother Lech founded PiS and served as president from 2005 until he died in a plane crash in Russia in 2010.

"Duda's victory signals a dramatic change on the Polish political scene," the legendary communist-era dissident Adam Michnik said on Sunday, warning that a potential victory by Kaczynski's PiS in parliament could mean that "Poland embarks on a velvet road to dictatorship."

Poland's president commands the military, picks the central bank chief, and may introduce and veto legislation in the country of 38 million people. If officials results confirm Duda's win, he would take office in August and could face a hostile government led by PO Prime Minister Ewa Kopacz, who pledged the "best possible cooperation" with the new president on Sunday.