An explosion at a BASF chemical complex in Ludwigshafen has killed at least two people, a spokesman has said. Several others are reported to be injured or missing. 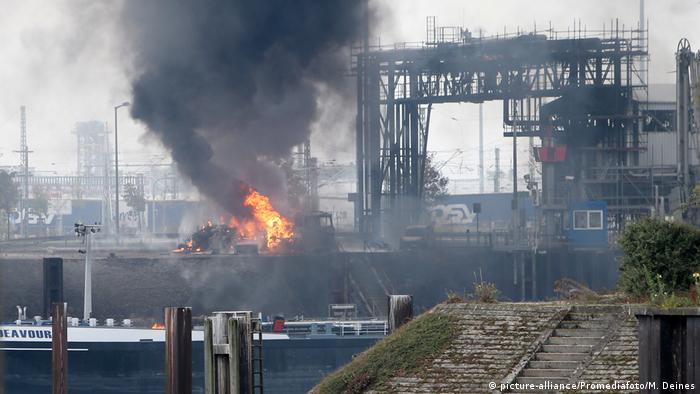 At least two people are dead, two others are missing and several severely injured following the explosion and fire on Monday at the world's largest chemicals company, BASF, in western Germany.

Police called on residents in Ludwigshafen, where the BASF complex is located, and the nearby city of Mannheim to stay indoors and suggested they close all windows and doors and shut down air-conditioning. They said they didn't know which chemicals exactly could be airborne within the plume of smoke rising from the accident site. The city of Ludwigshafen reported on Twitter that residents located near the plant were complaining of "respiratory irritation."

The company said it is still seeking to determine the exact cause of the blast. However, officials have said they ruled out terrorism.

"We will, of course, make every effort to find out quickly," said BASF plant manager Uwe Liebelt.

"There was an explosion with several people injured for as-yet undetermined reasons at around 11:30 (0930 GMT) at BASF Ludwigshafen," BASF said in a press release and on Twitter. The factory's steam crackers have been shut down for safety reasons due to the incident.

"Emergency services from the whole region are on the scene to prevent the fire spreading to other parts of the plant," Ludwigshafen city authorities said in a statement.

The blast took place at a river harbor which is used to unload flammable liquids and liquid gas, according to BASF.  Following the explosion, a pipeline that was undergoing repairs began spewing soot, BASF plant manager Liebelt told the press.

A large plume of smoke could be seen billowing over the chemical complex. A Twitter user filming the plume of smoke from the nearby city of Mannheim said the explosion caused "a giant column of fire."

Authorities in Ludwigshafen have shared a telephone hotline for those directly affected: +49 62 157 086 000.

A gas explosion in Germany has killed an excavation worker and injured more than 10 people. Several houses have been damaged. (23.10.2014)

German chemicals giant BASF has said it's had a slow start to the new business year. But despite a rather cautious outlook, the Ludwigshafen-based company said it would increase the dividend payout to shareholders. (26.02.2016)

A gas explosion in Germany's southwestern city of Ludwigshafen killed an excavation worker and injured more than 20 other people. An entire neighborhood was devastated. (24.10.2014)