At 100, Iris Apfel is as stylish as ever

She's an inspiration for fashion fans and designers of all ages. As she turns 100, the iconic Iris Apfel continues to boldly break all the rules. 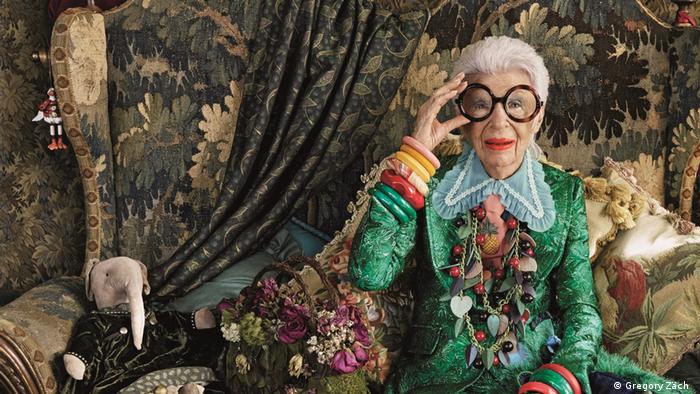 One necklace is not enough. There should be at least five — and they should get your attention. A single bracelet is boring. Go for 10 at a time. On each arm. And glasses should be bold.

Iris Apfel's jewelry rattles along whenever she moves, and her oversized round glasses have become her trademark. The style icon, glamour girl, fashion designer and interior designer turns 100 on August 29.

The exceptional centenarian is not afraid of extravagant clothes and eye-catching makeup. Her hair is colored bright gray, her lipstick bright red, pink or orange.

She has been dubbed the "oldest teenager in the world," and her Instagram account has more than 1.7 million followers. Her guiding philosophy has also been widely quoted: "I don't have any rules, because I would only be breaking them, so it's a waste of time."

That was her recipe for success right from the start. 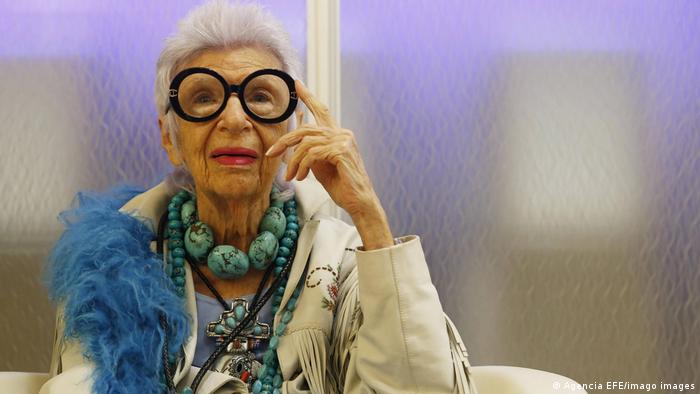 It's all a matter of accessories

Born in New York City in 1921, Apfel grew up during the Great Depression. Her mother advised her to buy a single simple black dress— that way she would always have something to wear, as it can be worn in casual and more dressy contexts. It all depends on the accessories you add.

At age 11, she discovered a brooch she really wanted in a basement shop in Greenwich Village, a neighborhood in New York. It cost $0.65, and she saved every penny she could find to finally buy it.

It was her first shopping experience, and it launched one of the largest private jewelry collections in the United States.

Curiosity and a sense of humor

To this day, Apfel still hunts for the right accessory in boutiques of all price ranges, at flea markets and in secondhand shops. She combines items that no one else would consider combining, mixing haute couture with junk, as well as shapes and patterns that supposedly do not go together. And when Apfel wears them together, they end up harmonizing. That's her great talent. She just dares and doesn't follow any trends. Instead, she sets them herself.

Young fashion designers flock around her wherever she appears, whether at a gallery opening or a fashion show.

Apfel presents her own collections with a lot of humor but also with meticulousness. She'll often add the finishing touch to a model's look — perhaps an extra necklace — before they head out to the catwalk. 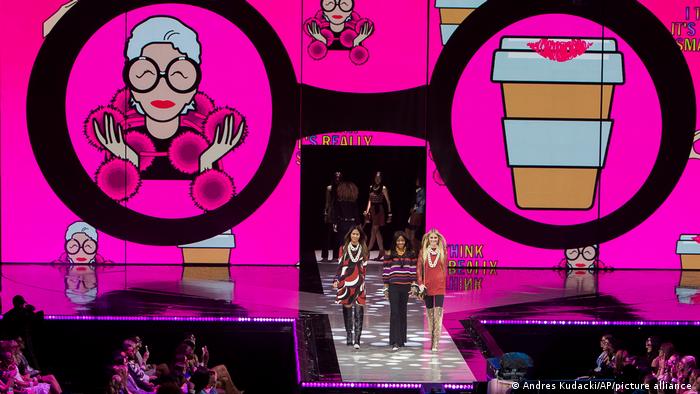 Her fashion shows reveal her sense of humor. This photo was taken during a show for the spring/summer 2017 collection

Apfel only recently started working as a fashion designer. For decades, she was a successful interior designer who was in great demand among the rich and famous in the US.

Her fabric creations were unique. Together with her late husband, Carl, whom she was married to for 68 years, Apfel traveled all over the world to find inspiration. She worked with various weavers to realize her very specific ideas, and she specialized in reproducing forgotten fabrics from past centuries.

Apfel's reputation even brought her to the White House, where she worked for nine US presidents. Even though she has never revealed too many details about working with them, she has hinted at the fact that former first lady Jackie Kennedy was a rather complicated client.

An exhibition at the Metropolitan Museum changed everything

Apfel's evolution into a fashion star was thanks to a 2005 exhibition at the Costume Institute of the Metropolitan Museum of Art.

Harold Koda, the curator of the New York museum at the time, had heard of Apfel's jewelry and clothing collection. Apfel has dedicated several rooms in her apartment on New York City's Park Avenue to her clothes. Creations by Dior, Lagerfeld, Saint Laurent, Galanos and Ungaro hang next to flea market finds and items from department stores.

Koda worked his way through Apfel's collection and finally transported around 300 items of clothing and several hundred accessories to the museum. The resulting exhibition was a huge success — and Apfel became a pop culture icon. There's now even a series of Iris Apfel emojis. 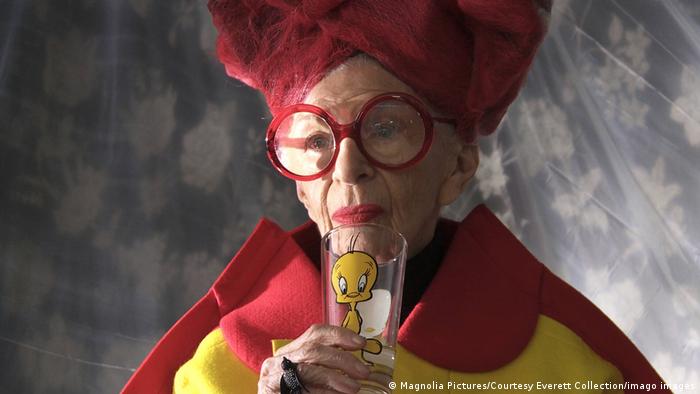 Iris Apfel can pull off the most unusual looks

After her husband died in 2015, shortly before his 101st birthday, Apfel did not retire but instead launched various new projects. Among others, she designed jewelry for the elderly with integrated technology that checks the wearer's health and alerts an ambulance in case of an emergency.

She's irritated by the fact that older people have been largely forgotten by designers and has repeatedly pointed out that no older woman can identify with 15-year-old models. And so she ended up signing her first modeling contract at the age of 97.

Not ready for retirement yet

Even at 100, Apfel's still not thinking about stepping back from active working life. She continues to work as an interior designer and is curating a collection of designs for Lowe's, a US home improvement retail chain that is also marking a century this year.

She's also still designing new glasses for her eyewear collection, which, of course, includes reading glasses — with stylishly bold frames. Because, as she says: "More is more and less is boring."

The luxury resale market is booming, but designer brands have been reluctant to embrace the secondhand trend. That attitude might be changing with Gucci owner Kering investing in an online resale platform.

Fashion made in Africa – where is it headed?

Meet the Congolese sapeurs, a Ugandan beauty queen fighting stigma surrounding HIV and find out where African design is headed.