Asylum lawyer employed by Germany released by Turkish court | Germany | News and in-depth reporting from Berlin and beyond | DW | 12.03.2020 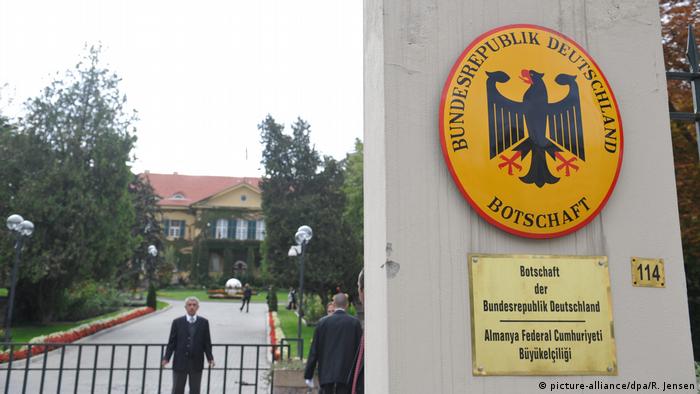 A Turkish court has ordered the release of the 49-year-old Yilmaz S., who had worked for the German embassy in Ankara and was arrested in September on espionage charges. The court did, however, impose a travel ban for the lawyer and set a case hearing date of April 22. Yilmaz's lawyer said his client was set to be released from Ankara's high-security Sincan prison later on Thursday.

Turkish prosecutors accused the 49-year-old Yilmaz S. of engaging in espionage in his role as a cooperating lawyer for asylum cases with the German Embassy in Ankara. Among the charges in his indictment, Yilmaz was accused of illegally accessing data from Turkey's National Judiciary Informatics System. The platform, which is operated by the Justice Ministry, allows registered users to access information on ongoing criminal proceedings. This allowed German authorities, for instance, to see whether individuals seeking asylum may in fact face criminal charges in Turkey.

Cooperating lawyers such as Yilmaz provided support for Germany's Federal Office for Migration and Refugees (BAMF) by investigating asylum applications in the countries where they are filed. The approach allowed BAMF officials to ascertain the veracity of applications and whether political asylum was warranted. "When local legal systems permit, cooperating attorneys contribute important information," according to Germany's Foreign Ministry. Work with cooperating lawyers in Turkey has increased significantly over the past several years. Lawyers working on behalf of Germany's government collected information on 592 asylum cases in 2019, officials reported in response to a parliamentary inquiry lodged by the Left party — in 2015 that number was only 23. In 2019, Germany's government had cooperation contracts with lawyers in 30 countries.

According to Germany's Foreign Ministry, which has paused all work with cooperating lawyers since Yilmaz was arrested in September, he was engaged in "customary" activities. German Foreign Minister Heiko Maas vehemently protested Yilmaz's arrest when he recently met with his Turkish counterpart, Mevlut Cavusoglu. It is also said that the German Embassy was alerted to the possibility that the lawyer could be arrested before he was taken into custody. Yilmaz's indictment stated that he approached the German Embassy to ask authorities there to apply for authorization of his activities from the Turkish Foreign Ministry.

According to Germany's Federal Criminal Police Office (BKA), Turkish authorities seized sensitive documents pertaining to 83 asylum applicants in the initial raid on Yilmaz's office. The BKA reported that family members were also named in the documents. Documents from a further 300 cases were also seized from the lawyer's office in a subsequent search, according to the BKA. Asylum applicants generally included detailed information about which routes they fled along and people from whom they received assistance, as well as those who may have harbored them along their journeys. The German government feared that Turkish authorities could use such information to go after the friends and relatives of people who applied for asylum.

Yilmaz's arrest also put a spotlight on a major dispute between the governments of Germany and Turkey. Officials in Ankara claimed that their counterparts in Berlin are harboring "terrorists" and "rebels," citing German authorities' unwillingness to extradite people accused of belonging to the banned Kurdistan Workers' Party or being followers of the US-based Islamic cleric Fethullah Gulen. Turkish officials claim that the Gulen movement was behind the failed military coup to overthrow President Recep Tayyip Erdogan in July 2016.

Turkish officials have arrested hundreds of thousands of people in a wave of repression since the coup. Several thousand Turks — including intellectuals such as Asli Erdogan, the journalist Can Dundar, and a number of opposition figures, scientists and activists —  have fled to Germany.