With floats packed with satire in Cologne, Düsseldorf and Mainz, the Rose Monday parades are the highlight of Carnival season. German astronaut Alexander Gerst reveals what the tradition and space travel have in common.

Cologne's Carnival is the biggest and best-known in Germany, and of its many events, the Rose Monday parade is undoubtedly the highlight. In addition to the 74 decorated floats, many of which take jabs at politicians like Chancellor Angela Merkel and US President Donald Trump, this year's special guest is German astronaut Alexander Gerst, known as "Astro-Alex." 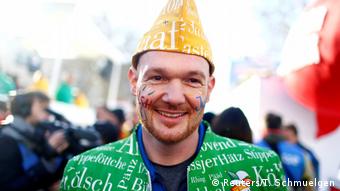 The space explorer sees similarities between the raucous parade and being in outer space. Both are "part of humanity's culture," the 42-year-old told German news agency dpa.

Asked if he prefers to ride on a parade float or to travel through space, he said: "Both are good, but I have the Rose Monday float today, so let's see how this goes," adding, "As an astronaut, of course you always want to go back to outer space."

The city of Cologne first held the event in 1823 in an effort to mimic the famous celebrations in Venice, Italy. It was a success, causing many cities in the region to follow suit.

Today, Carnival is celebrated primarily in western Germany, with cities like Düsseldorf and Mainz holding their own celebrations.

Last year, temperatures were frigid on the day of the celebration. This year, the weather was once again far from perfect, as storm warnings shook the region. Despite the bad weather, hundreds of thousands of costume-wearing revelers turned out on the streets of Mainz and Cologne for the parades, which started promptly. 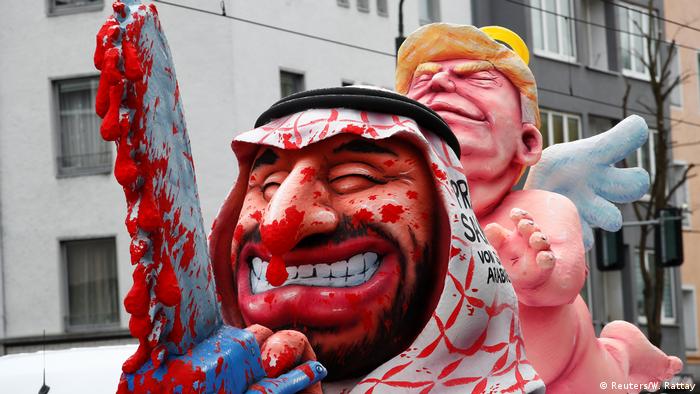 In Düsseldorf, the festivities started later than usual, yet the parade's floats eventually moved along their route bringing their typical satire.

One of the most graphic floats depicted President Trump as an angel atop a bloody chainsaw-wielding likeness of Saudi Crown Prince Mohammed bin Salman. It was a reference to the president's lack of criticism of the murder of Saudi critic Jamal Khashoggi, widely thought to be directed by the prince.

In the Christian tradition, Rose Monday is seen as the last day to celebrate before 40 days of fasting during Lent. As a result, parades typically feature participants throwing sweets to the audience from floats.

An American's first Carnival in Cologne

Carnival in Cologne is Germany's most famous celebration of the event. Thousands in costume flock to the streets for its opening party: Women's Carnival Day. DW's Hallie Rawlinson reports on her first time attending. (01.03.2019)

Carnival: A tsunami of beer, broken glass and caramel sweets

Attention Carnival fans: Be aware that it can be a cruel fate to live in the Rhineland if you are a non-reveler. For when the yearly festivity comes to town it is accompanied by heavy drinking, garbage and aggression. (07.02.2018)

Venice is a tourist mecca. But very few visitors catch a glimpse behind the scenes of the city on the lagoon. Our film visits connoisseurs and celebrities who talk about their work and life there. (12.02.2015)