The 47-year-old WikiLeaks founder faces charges in the United States under the Espionage Act. The UK must now determine whether he can be extradited to the US to stand trial. 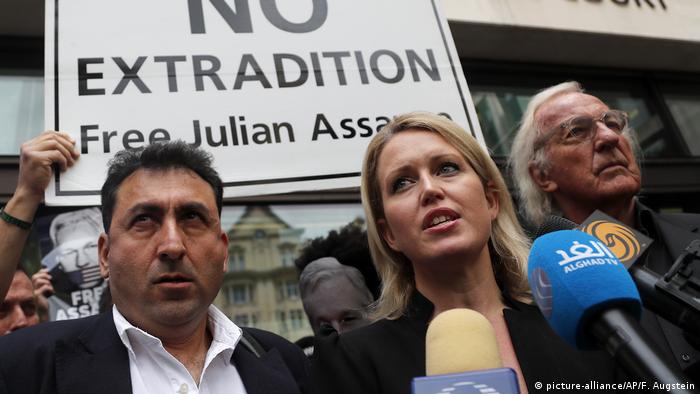 Assange, who faces 18 charges under the US Espionage Act, appeared via video link from Belmarsh Prison outside London. Assange told the court, "175 years of my life is effectively at stake." That is the possible sentence he could receive should he be found guilty of all charges.

The US claims Assange endangered the lives of agents, assets, human rights defenders and journalists when his organization WikiLeaks published a trove of unredacted files and video recordings in 2010 that were related to the US wars in Afghanistan and Iraq.

US 'has tried to mislead the press'

Assange told the court: "It is important that people aren't fooled into believing that WikiLeaks is anything but a publisher. The US government has tried to mislead the press."

Though the US says he is a criminal, supporters see him as an advocate for free speech and a defender of the truth for exposing abuse of power by the world's major governments.

Assange's lawyers said the case being brought against him is "a direct attack on free speech and a direct attack on journalism." They added that their client "is under a huge amount of pressure and — under very difficult circumstances — facing a significant, complex case."

Ben Brandon, who is representing the US, told the court that his country's extradition request "related to one of the largest compromises of confidential information in the history of the United States."

Charlie Beckett: Assange Arrest a 'terrible message' to the world

'A crime that should not exist'

Human rights groups fear the US wants to put Assange behind bars for life, or worse still, that it may seek the death penalty. The rights group Amnesty International said: "The UK must comply with the commitment already made that he would not be sent anywhere he could face torture, ill-treatment, or the death penalty."

Germany's DJV journalists' association has called on the British government to release Assange immediately, saying: "The WikiLeaks founder is being accused of a crime that should not exist: accessory to treason through publication."

In prison since April

Assange has been serving a 50-week sentence at Belmarsh for violating the terms of his bail since authorities dragged him out of the Ecuadorian Embassy in London on April 11 after Ecuador terminated his 7-year asylum.

Assange had fled to the embassy in 2012 after he was charged with rape in Sweden. Though the charges still stand, a Swedish court last week blocked prosecutors' requests to have Assange extradited to Sweden, thus paving the way for an extradition to the US.

Two preliminary hearings are scheduled to take place in July and October before the Australian faces what is expected to be a five-day hearing in February.

Assange and his lawyers will also have several possibilities to appeal any February ruling.

The case Assange: An exclusive interview with Ecuador's Ambassador to the UK