Chile’s politically active youth took to the streets to demand free higher education ahead of November's election. They say Michelle Bachelet’s administration has failed to keep its promises on education reform. 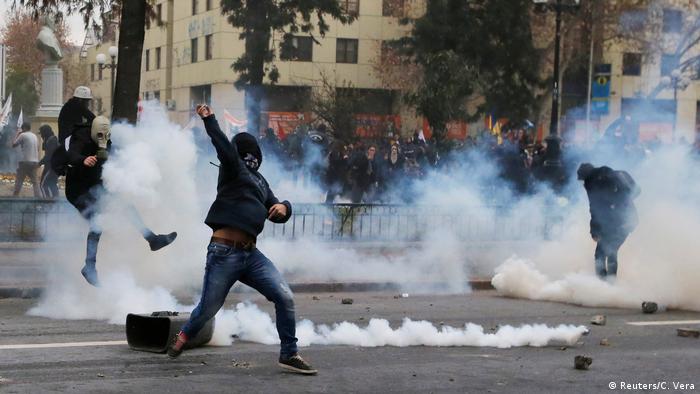 The hashtag #AsiGanaChile, translates to "This is How Chile Wins," brought thousands of Chilean students to the streets on both June 21 and June 22. The hashtag, created for the protest by the Confederation of Chilean Students (Confech), alludes to their longer slogan "This game is won on the streets." The "game" is between the government and the students, with the latter pushing for universal quality higher education. They're also fighting against sexism that female students and professors face in universities, adding the hashtag #EllasJuegan, loosely translated as #WomenAtPlay.

Education is expensive for most students in Chile and many are unable to attend school, while others are stuck in severe debt with massive interest rates. According to the OECD, the cost of university tuition in the country rose by 87 percent between 2005 and 2012. Additionally, major private companies in Chile are making large profits off the system, while many education institutes are doing poorly. Despite Pinochet ending public education in 1981, massive student-led protests, which began before President Bachelet took office in 2014, forced her to officially sign a reform in 2015 promising to provide free higher education.

However, the reform received much criticism. According to Confech, it reduced only around 14 percent of university tuition costs, encouraging privatization in the process. These measures, which helped stir youth discontent, have turned into a major student social movement in Chile, condemning Bachelet's insufficiency in education reforms and her government's non-response to the student movement in legislature. Confech tweeted on Wednesday, "Again on the streets demanding public, free, quality education and without debt."

Many of the protests ended with strong police crackdowns - from water cannons to tear gas - and while some of the students did throw paint at the police and their vehicles, armored trucks at a protest where most of the participants are students caused a stir among protesters.

Influence on the November election

The students' unrest may have an impact on the upcoming November presidential election. The front-runner, Sebastián Piñera has stated he will roll back the recent education reforms initiated by Bachelet's government and in their place advance a system of scholarships. However, Piñera, who was president from 2010-2014, has a shaky history in education reform. His own approval ratings as president plummeted due to massive student-led demonstrations on higher education.