Southeast Asian foreign ministers have started regional security talks with an agenda full of conflicts. China's neighbors are worried about the country's controversial island-building in the South China Sea. 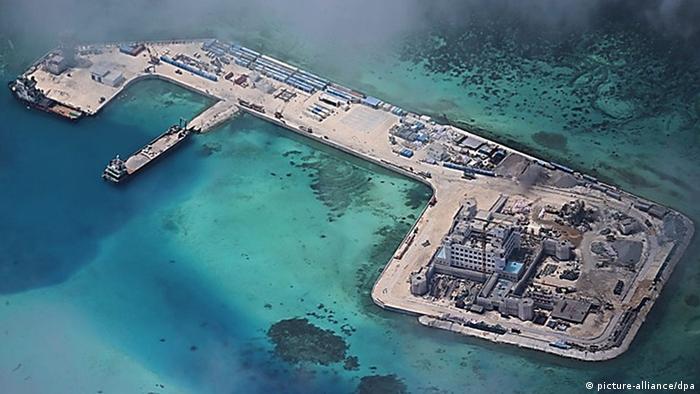 Chinese Foreign Minister Wang Yi signaled no compromise regarding his country's island-building, ahead of the regional security talks hosted by the 10-member Association of Southeast Asian Nations (ASEAN) that started on Tuesday.

Beijing is expanding tiny reefs in the South China Sea into islands and topping some with military posts to reinforce its claims over the strategic waters. Before traveling to Malaysia, Wang warned that attempts to bring the issue up at the ASEAN security talks were "counter-productive" and would "heighten confrontation."

Malaysian Foreign Minister Anifah Aman told fellow foreign ministers on Tuesday at the security talks that the group of Southeast Asian nations "can and should play a vital part in effecting an amicable settlement" on the South China Sea.

"Above all, we must be seen to address this issue peacefully and cooperatively," he added. "We have made a positive start but we need to do more."

China has claimed control over nearly all of the South China Sea, which is a strategically important shipping route. Beijing insisted that the dispute should be tackled on a bilateral basis with rival claimants rather than with a united block.

The Center for Strategic and International Studies (CSIS) said Beijing could be preparing to build a second airstrip on an artificial island, adding to the tensions. According to the Washington-based think tank, it is already building a runway on Fiery Cross reef.

The ASEAN ministers were also seeking to deepen integration within the bloc as it moves toward becoming a single market later in the year, according to officials. ASEAN groups Brunei, Cambodia, Indonesia, Laos, Myanmar, Malaysia, the Philippines, Singapore, Thailand and Vietnam. "Our 10 member states are at different stages [of development] - and narrowing these gaps is not optional," Malaysia's Prime Minister Najib Razak said on Tuesday.

At the opening of the talks in Kuala Lumpur, he hailed ASEAN's diplomatic actions in "dealing swiftly with the recent crisis of irregular migration in Southeast Asia" when thousands of Bangladeshi and Myanmar Rohingya migrants were stranded in small boats in the seas. Although the first reaction of countries such as Thailand, Malaysia and Indonesia was to drive away the refugees, they eventually reached an agreement to accommodate them.

Only Southeast Asian foreign ministers met on Tuesday, but the talks will expand over the following days into the ASEAN Regional Forum (ARF), attended by US Secretary of State John Kerry, China's Foreign Minister Wang Yi and envoys from the wider region including Japan, North Korea, South Korea and Russia.

The general perception about Myanmar's Rohingya conflict is that it is a religious issue. Analyst Siegfried O. Wolf, however, believes the crisis is more politically and economically driven. (04.06.2015)