As Ghana develops, chiefs' powers are being redefined

In one of Africa's fastest-changing societies, Ghana's traditional chiefs still wield great power. But as their roles change, they are losing authority to the state. 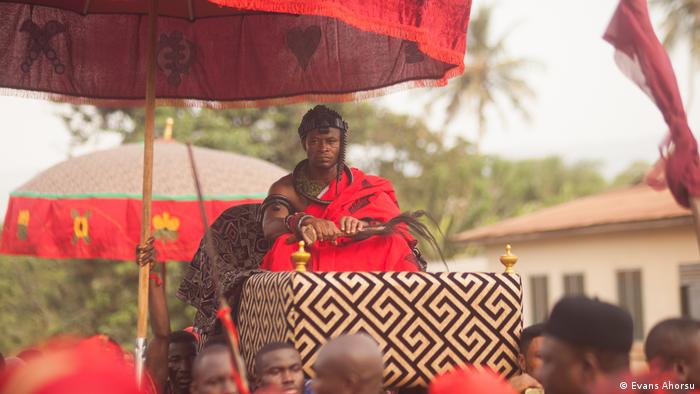 A chief, wearing a red robe, is carried on a litter

Before Africa was hit with the coronavirus, Ghana had one of the world's fast growing economies. While the West African country is still predominantly rural, it's quickly urbanizing as jobs and other opportunities draw people into towns and cities.

In addition, Ghana is one of Africa's most vital democracies, with elections vigorously contested.

But in a modernizing Ghana, traditional chiefs are still playing large role especially when it comes to land ownership and resolving disputes.

While some nations, such as Botswana or South Africa, have defined the office of their chiefs through legislation, the traditional leadership system or chieftaincy in Ghana is even guaranteed in country's constitution.

"The institution of chieftaincy, together with its traditional councils as established by customary law and usage, is hereby guaranteed," says the article 270 of the constitution.

"One way or the other, you will have to deal with the chiefs," says Ato, a young surveyor from Takoradi in Ghana's Western Region.

"I went to finalize the purchase of a piece of land for a client and though the chief was not the rightful contact, he was still involved in the negotiation."

Customary leaders generally manage land on behalf of, and for the benefit of their communities.

"Traditionally, land is owned by the dead, the living and the future generations. Chiefs are the guardian of it," explains Daniel Inkoom, professor at the Department of Planning of Kwame Nkrumah University in Kumasi, Ghana's second biggest city.

Land negotiations are a minefield

But when it comes to large-scale projects crossing through the land of many communities, negotiating with chiefs can also be vexing.

This is proving the case with one of Ghana's most significant development projects – the repair and expansion of its railway network which requires the state to acquire large sections of land.

"Work [on the railway line] has been delayed for months. It hasn't been easy to reach agreements with all chiefs, each one wanting different things," says Marco Casano, a supervisory engineer of the Western line.

When complete, the Western line will stretch from Ghana's booming port city of Takoradi to Kumasi.

Chiefs caught between tradition and law

Ghana has an ongoing Land Administration Project (LAP), started in 2003, to register who owns what land.

The LAP gives chiefs some discretion to define the customary law that would inform the registration of land rights. Ghana has been at the center of an economic boom

Many land deeds aren't registered, however, because of high fees and complex procedures.

Ironically, this means that as well as supposedly acting in the best interests of their communities, chiefs are now often caught up resolving land disputes on behalf of state authorities even though the land conflict has often come about because of failings of the very same government.

"Because they are closer to the people than government officials are, chiefs are becoming development agents of the civil state and are more aligned to it. I always engage with them for work and I see this," says John M. Wugah, director of the National Disaster Management Organization of Tongu district, Volta Region.

Moving away from the past

In the village of Fodome Helu, the divisional capital of Fodome Traditional Area in Ghana's eastern Volta Region, Timothy Akpatsa II was nominated a new paramount chief in December 2019.

Warriors, sorcerers and traditional clothing abounded during the appointment ceremony. But although customs are taken seriously, most traditional leaders aren't stuck in the past.

Well educated chiefs often leave their villages to pursue a career, causing their role as cultural leaders to fade. At the same time,  though, this can strengthen the bond between modern politics and the chiefs – politicians often recruit chiefs to mobilize their communities to vote on behalf of the politicians.

Closer to the elites

"The current trend to fill chieftaincy positions with highly educated professionals blurs the traditional distinction between governmental elite and chiefs, and creates new alliances between these two groups," says Janine Ubink, a professor of law, governance and development at Leiden University in the Netherlands. 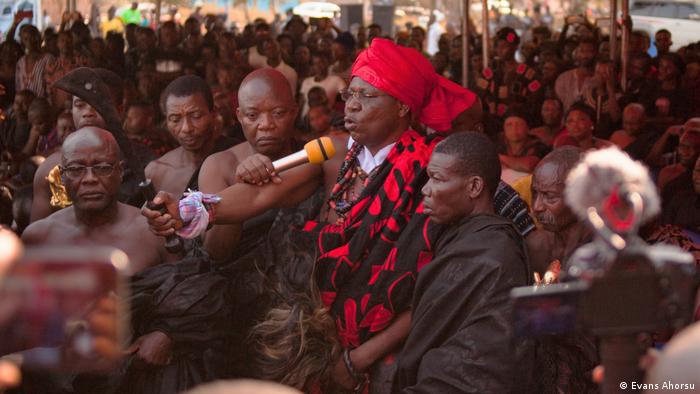 For Chief Akpatsa, one way to avoid this pitfall is for traditional authorities to move away from the old ruling practice of partnering with politicians to secure their power, and instead, partner with  government and NGOs to develop communities.

"Modern leaders are more capable of lobbying for their community, but they are more easily influenced by politics. Many are businessmen who depend on the government for their projects," he says.

"However, I prefer the new generation of chiefs."

Ghana's Queen Mothers are traditional leaders in their communities who are now seeking a modern role. They campaign for women's rights, but say they are being sidelined by traditional male rulers, or chiefs. (10.08.2016)

Namibia: Who owns the land?

Nambia is currently holding a weeklong conference on land reform. It hopes to reach a solution on the unfair distribution of land between the black and white populations. But not all of the players are at the table. (03.10.2018)