Judith Arndt showed the German Cycling Federation what she thought of them as she claimed second place in the women's road race on Sunday. Arndt was unhappy with their exclusion of sprinter Petra Rossner. 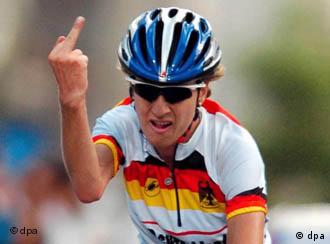 Judith Arndt had a clear message for Germany's Cycling Federation

Arndt was disconsolate with her silver medal following the race, accusing the German Cycling Federation of squandering a chance to win gold by excluding her girlfriend, sprinter Petra Rossner, from the Olympic team. Gold went to Australia's Sara Carrigan, who surged past Arndt over the final 100 meters.

Arndt chose to express her dissatisfaction by showing the German federation the finger -- a gesture that's landed her with a fine of 200 Swiss francs, or roughly €130.

"Of course we're happy to have won the silver medal, but actually, we've lost the gold," Arndt said after the race. "If Petra Rossner had been nominated, we could've had the gold. She would've been our trump card, because she's the fastest."

As for her unsportsmanlike gesture, Arndt seemed to have regrets when asked about it in an interview with German public broadcaster ARD.

"It shouldn't have happened, but I'm only human, and my emotions at that moment were overpowering," she said.

The president of the German Cycling Federation, Sylvia Schenk, said she couldn't understand why Arndt was so upset. "The race course proved that this was no race for sprinters, so I really don't understand this criticism."

Rossner, who accompanied Arndt to Athens as a tourist only, rejected Schenk's comments, saying that the cyclist who took third place -- Russia's Olga Slyusareva -- was also a sprinter.

The race, which stretched over 118.8 km of narrow Athenian streets, was mostly a cat-and-mouse affair, with riders breaking out and quickly falling back into the pack. Winner Carrigan staged a breakaway with Arndt in the last nine laps. The 23-year-old punched the air as she crossed the finish line, ecstatic with her first major victory outside of Australia. 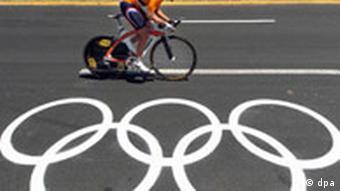 Defending champion Leontien Zijlaard-van Moorsel of the Netherlands (photo) crashed out with two laps to go, dragging three other riders down with her. She was taken away in an ambulance with her husband-coach Michael Zijlaard by her side. The Dutch team doctor said her participation in Wednesday's time trial is uncertain.