The founder of Argentina's leading human rights group has located the grandson taken away from her family almost four decades ago. His mother was executed as a prisoner of the 1970s military dictatorship. 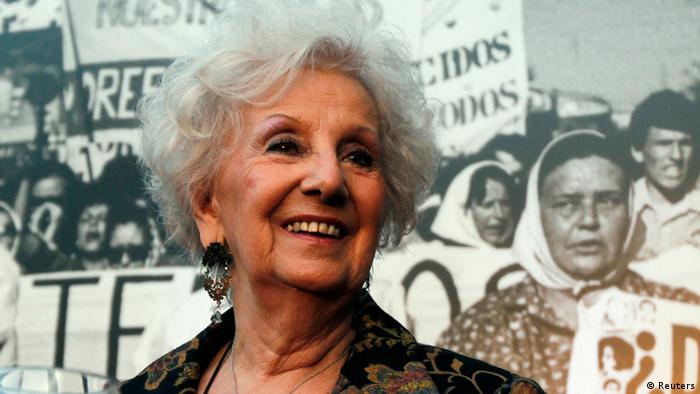 Estela Barnes de Carlotto, founder of the rights group Grandmothers of the Plaza de Mayo, announced Tuesday that she had finally found her grandson thanks to DNA testing.

Her 36-year old grandson, whose name has not been released by the family, came forward on his own to have a DNA test taken and have the sample compared in a national database.

"I want to touch him, look at him," Carlotto said, adding that she learned that her grandson was "an artist, a musician like many of his cousins." Argentinian media has identified him as Ignacio Hurban, a pianist and composer who is director of a music school southwest of Buenos Aires.

Guido Carlotto, a son of de Carlotto, said the DNA test revealed with "99.9 percent" compatibility that the man is the son of his sister, Laura Carlotto. Laura, a university student activist, was taken to a prison camp by the right-wing authoritarian regime in 1977. At the time she was three months pregnant. She gave birth on June 26, 1978, while in captivity, and named her son Guido. She was executed two months later.

"Thanks to God, thanks to life, because I didn't want to die without embracing him and soon I will be able to," the 83-year-old grandmother said at a news conference covered live on national television. The pair have not yet met.

'The search for the rest must continue'

The Grandmothers of the Plaza de Mayo believe around 500 children were seized from people killed by the dictatorship with many of them being adopted by couples who supported the regime. Guido is the 114th child that the grandmothers have found so far.

De Carlotto is considered a symbol of the struggle for justice for victims of the 1976-83 dictatorship, so the announcement was major news in Argentina.

President Cristina Fernandez de Kirchner called de Carlotto when she learned the news. "Cristina called me crying... I told her, 'Yes, Cristina it's true.' She said, 'What great joy,' and we cried together," the grandmother said.

De Carlotto said the identification of her grandson is a form of reparation for the brutality of the dictatorship, however she said, "The search for the rest must continue."