Argentina has made it to the final of the World Cup, for the first time in 24 years. The fans back home are already euphoric, and now they are hoping for their second World Cup triumph after winning in 1986. 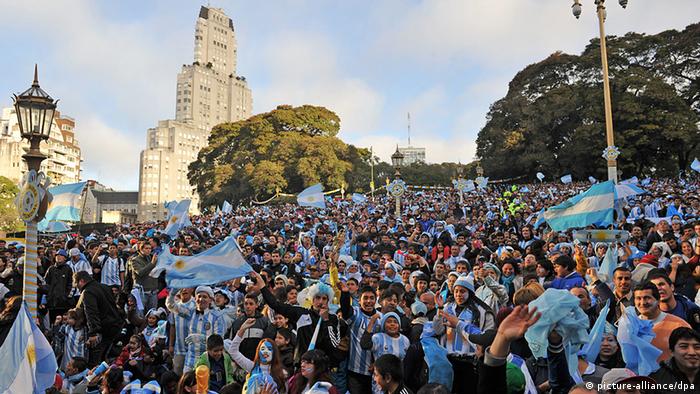 The last penalty kick of the game from Maxi Rodriguez has just landed in the goal behind the Dutch goalkeeper, the ball is still spinning in the net, and celebrations erupt in Buenos Aires.

After being empty for near on two and a half hours, the streets are full in just a matter of minutes, with car drivers beeping their horns and singing fans. In the bars, blue and white dressed fans hug each other with joy. Argentina is through to the final, but the fans celebrate as if they have just won the World Cup.

The tournament in neighboring Brazil sets the pace for life here in Argentina. When the "Albiceleste" is playing, the country goes into football mode: whether you are at the doctor or at some local authority offices, you never get away without talking about football. If you don't wear blue and white accessories, you are looked at skeptically. 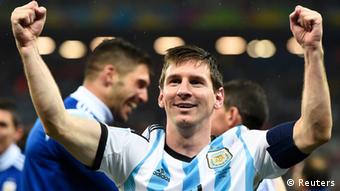 On the days when Argentina aren't playing, the fans are analyzing everything: possible opponents, the Argentine players and their personal situations, and, of course all other issues associated with the tournament.

The World Cup special programs on television can go for eight to ten hours, or even longer when Messi's mood, di Maria's thigh or the gestures of coach Alejandro Sabella need extra special analysis. Other news programming is packed into three minute blocks and – in some cases – even presented in splitscreen mode, so no football action is missed.

The reports on the country facing its second state bankruptcy inside just a few years can wait another two weeks. The investigation into alleged corruption and abuse of office by Vice-President Amado Dass' is ongoing but for the moment the focus is on the World Cup. Politics is on a break in Argentina. Well, in the public eye at least.

The only exception is the politics practised by state broadcaster "Canal 7." The enormous costs are carried by the government-funded project Futbol para todos, or football for all. The government uses the programming to put its view of the world out to the people of Argentina, via some well-made (and some not so well-made) film clips.

When the Argentine team is in action the presenters are, let's say, particularly patriotic. Neutral observers might occasionally wonder if they are watching the same game as the commentators.

Winning is the key

But that doesn't detract from the joy that people feel here. Neither does the questionable quality of the team, and their unsteady path through the tournament so far. Their showings were, despite an easy group stage and not particularly strong opponents in the knockout stages, not very convincing. Without their superstar Lionel Messi the team probably wouldn't be where they are now - in a World Cup final. 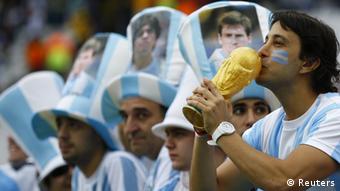 The fans are pragmatic and focused on the results. That said, they are happy to put up with less beautiful football, if it means they progress another round. The desire for the World Cup title is strong. The last time they won was 28 years ago against West Germany in Mexico. Since then things haven't gone so well in Argentine football. In the final in 1990, they lost to West Germany, and since then they never got further than the quarter-finals.

The fans are eternally thankful that they have come so far and are now a chance for the title. They support their stars and are simply looking forward to the final. Even the mocking of old rival Brazil has been restrained. As a Brazilian sports publication called on Selecao fans to support Germany in the final, Argentine media were quick to remin the Brazilians about their 7-1 loss. But that was it though.

The fans here have a lot of respect for Germany. The national paper "La Nacion" had three commentaries and analysis pieces on the Germany game on Wednesday. The tone was: "They have been working towards this title for years. Who will be able to stop them now?"

After the win against the Netherlands, Argentina's players went straight into modesty mode. "We will give everything, we will play at 100 percent in order to win on Sunday," said Coach Sabella. On Facebook Messi wrote: "We need to make just one more little step."

After the game, Buenos Aires' Avenida 9 de Julio, the world's widest street, was full of people celebrating through the night. Hundreds of thousands made their way to the city's Obelisk, a symbol of the city, too. An inflatable version of the "Cristo Redentor", the famous mega-statue of Jesus Christ from Rio de Janeiro, floats above the crowd.

And this is just the semifinal. Imagine what will happen if they win the World Cup final on Sunday.

Germany's semifinal win against Brazil was sweeter than a caipirinha, and twice as intoxicating. Yet Argentina will pose a much meatier test in the Maracana: here are three reasons for Germans to fear the final. (10.07.2014)

Argentina will play Germany in the World Cup final, after beating the Netherlands in a penalty shootout in Sao Paulo. The Albiceleste made no mistakes, while goalie Sergio Romero denied Ron Vlaar and Wesley Sneijder. (09.07.2014)