After firing over the crossbar with a penalty as Argentina lost the Copa America to Chile, Lionel Messi has said that the national team "is not for me" anymore. He scored 55 goals for Argentina, just short of the record. 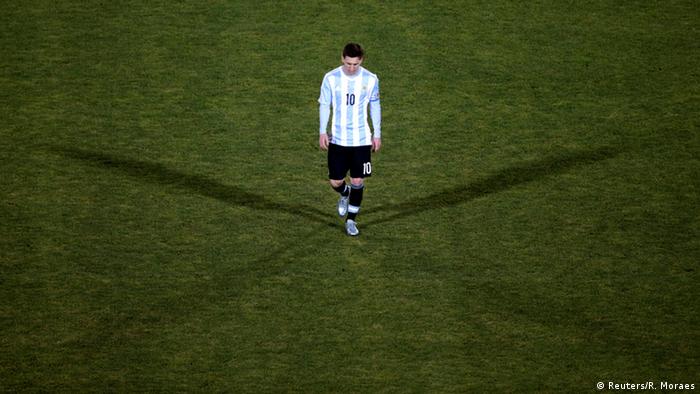 An emotional Lionel Messi told reporters after the defeat - 0-0 and then 4-2 in the penalty shootout - that his quitting would be "for the good of everybody."

Argentina's 23-year silverware drought thereby endured, one that has spanned Messi's more than 100 games for his country.

"It's incredible, the fact that we can't win it. It happened to us again, and by penalty kicks," Messi told reporters in the mixed zone. "It's the third consecutive final. We tried. We tried and it wasn't for us."

Argentina also lost the 2014 World Cup final in extra time to Germany, and a decisive goal from Mario Götze. In 2015, the sky-blue-and-whites lost the Copa America final to Chile. In defeat in both cases, Messi was selected as player of the tournament. 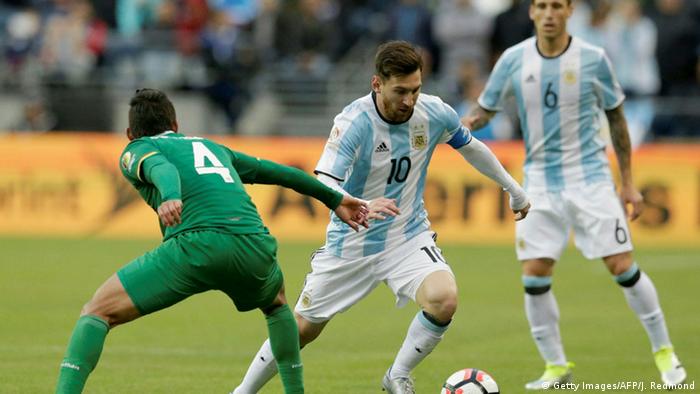 Messi scored 55 goals for Argentina in his international career, one shy of the record tally by striker Gabriel Batistuta.

The Barcelona star, still only 29 years old, netted once and set up two in Argentina's 4-0 semifinal win over the US, which hosted the special centenary tournament this year.

Five times FIFA's world player of the year, Messi has long been hailed as the country's greatest talent since Diego Maradona, albeit without ever duplicating Maradona's big tournament successes such as the 1986 World Cup. His club career with Barcelona, on the other hand, has delivered silverware in droves.

Lionel Messi: The champion who bounced back

On the night when Lionel Messi created yet more history, it's time to appreciate the gift that is the now record five-time Ballon d'Or winner, says DW's Alex Chaffer. (11.01.2016)

Sunday’s Copa America final not only pits Argentina against South American rivals Chile. The match in New Jersey may finally give Lionel Messi the one thing missing from his trophy cabinet: a major international title. (25.06.2016)

Barcelona superstar Lionel Messi has testified at his tax-fraud trial, saying that he had not knowingly done anything wrong. The Argentine striker could face nearly two years in jail if found guilty. (02.06.2016)