Transportation unions in Argentina have organized a strike, calling on the government to reduce income tax for lower paid workers. The action brought cities to a halt. 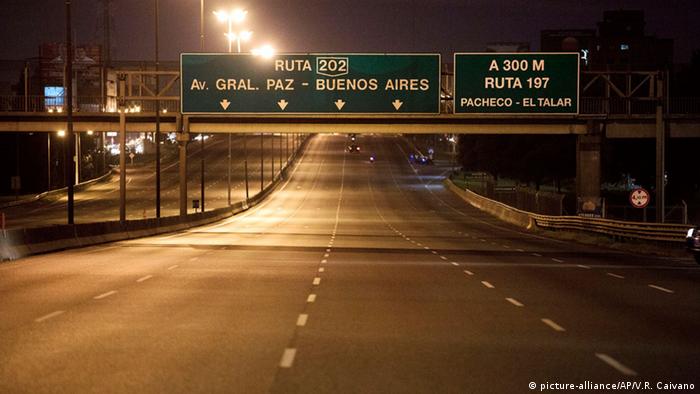 Transportation in Argentina's largest cities ground to a halt on Tuesday as unions went on strike, calling for tax cuts for low-income workers.

The shutdown in the capital, Buenos Aires, began at midnight and buses, trains and trams failed to run. Flights were rerouted or delayed and airlines in neighboring Chile and Brazil canceled flights to and from the country throughout the day.

Other major Argentine cities including Cordoba, Rosario and Mendoza were also affected.

"This strike is our answer to the government's refusal to listen to our plea that it's unfair to keep deducting money from our wages," Pablo Moyano of the powerful Truck Drivers Union told Radio con Vos, calling the walkout a "total success."

But President Cristina Fernandez de Kirchner sought to play down the extent of the strike. She said in a televised address: "If there had been transport today, all Argentines would have gone to work."

Unions have complained that workers will have to pay more tax if the double-digit salary hikes, designed to keep pace with inflation, are awarded without lifting the threshold for the lowest tax bracket.

The government says inflation is only running at about 24 percent but private economists estimate it to be in the region of 35 percent.

Economy Minister Axel Kicillof said the government needs income tax revenue to support the poorest people in society: "Only 10 percent of all Argentine workers pay income tax; they are 850,000 people out of a labor force of 11 million."

Port workers in Rosario also downed tools, preventing grains from being exported. Banks shut their doors for the day. There was no garbage collection, and many businesses closed as employees could not get to work.

Presidential elections will be held in October and the government is concerned that unions sympathetic to the opposition will organize more strikes in the months ahead.

Unions have threatened to stage another strike, this time for 36 hours, if the government does not give in to their demands.

Late last year, the government averted a similar strike by announcing that workers' bonuses for the month of December would be exempt from income tax.

Argentina has been denied an extension to repay $1.65 billion in debt to US hedge funds, forcing the country's hand as a deadline to make a payment to its other creditors looms. (27.06.2014)