Argentina will play Germany in the World Cup final, after beating the Netherlands in a penalty shootout in Sao Paulo. The Albiceleste made no mistakes, while goalie Sergio Romero denied Ron Vlaar and Wesley Sneijder. 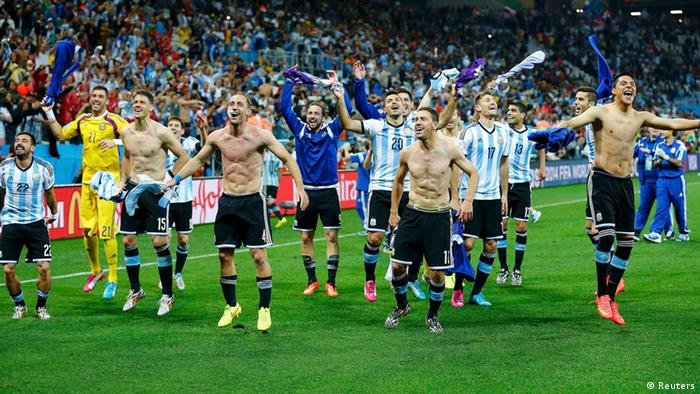 After the first ever World Cup semifinal ever to run for 120 minutes without any goals, perhaps the shootout's first penalty was fated. Dutch defender Ron Vlaar, one of the standout performers on the night, stepped up and put a weak penalty to Sergio Romero's left. The Argentina goalie got down sharply to save, setting the tone for a flawless shootout for the Albiceleste. Romero later denied Wesley Sneijder with an acrobatic save to his right, meaning that shooters like Lionel Messi simply had to hold up their end of bargain. 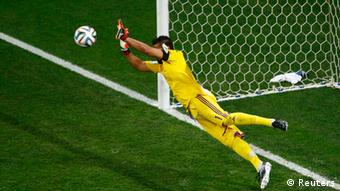 Romero's second save left the Netherlands on the ropes

In the other goal, Jasper Cillessen couldn't save the first penalty of his professional career, despite nearly stopping the decisive fourth spot kick from Maxi Rodriguez. Cillessen's hefty two-handed contact on the ball only pushed it into the top of his goal, sealing the Netherlands' fate. The tortuous shootout - certainly for Vlaar, Sneijder and Cillessen - followed 120 minutes of football which likely took their toll on spectators. 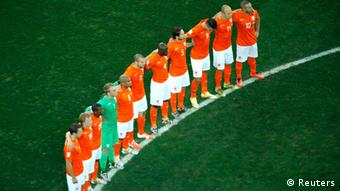 In a tense opening period between two of the competition's better defenses, the Netherlands established early dominance with possession, without carving out any major chances. A Lionel Messi free-kick around 15 minutes in called Cillessen into action at the other end, but the Ajax stopper wasn't troubled by the curler. Argentina began to assert themselves after this, but could only turn their attacks into a string of corners.

Big defender Ezequiel Garay dived for one of these deliveries in the 24th minute, but only reached it with his shoulder instead of his head. Defender Javier Mascherano also had a brief scare after a clash of heads with Georginio Wijnaldum, but returned, somewhat gingerly, to the pitch after treatment late in the first half. 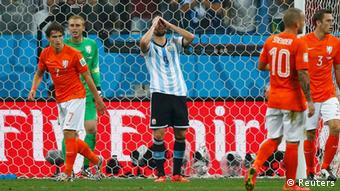 Gonzalo Higuain had the best looks, out of a rather bad bunch

Neither side really unlocked the other to create a top chance at goal before the break, with van Gaal's innovative defensive tactics suffocating the slightly more adventurous Argentines.

Shortly before the hour-mark, Gonzalo Higuain had the best half-chance of the match, rising to meet a cross from the right flank. Half-time Dutch substitute Daryl Janmaat jumped with Higuain, however, and was able to get the last touch on the ball, diverting it to safety.

With 15 minutes left in regulation time, and the Netherlands' reserve goalie Tim Krul's excitement surely rising, Higuain came close again. Arriving at the near-post following another move down the right, Higuain volleyed into the side-netting of Cillessen's goal - providing a hefty scare for the fans in orange. The shot would not have counted, the Real Madrid forward was pulled back for offside.

Mascherano was called into action in the Argentine penalty area moments before the end of the 90, sliding in to block a close-range shot from Arjen Robben. The Bayern winger had already been forced to shoot from a tough angle, but Mascherano's intervention saved his goalie Sergio Romero from any late activity.

Even tiring legs and extra time failed to really open up the match, although substitute Rodrigo Palacio could have averted a penalty shootout with a close-range header around 115 minutes in. Palacio was running onto a bouncing ball over the Dutch defense and couldn't get enough purchase on the header, allowing Cillessen a comfortable catch.

Cillessen had another save to make seconds later from a Maxi Rodriguez back-post volley, but proved himself equal to the task. Four less satisfying attempted saves would follow for the Ajax keeper, who van Gaal subbed out especially for the penalty shootout against Costa Rica. What looked like a coaching masterstroke might have come back to bite him.