Women in Argentina will now have the right to terminate pregnancy at up to 14 weeks. The Senate vote is a landmark for abortion rights in Latin America. 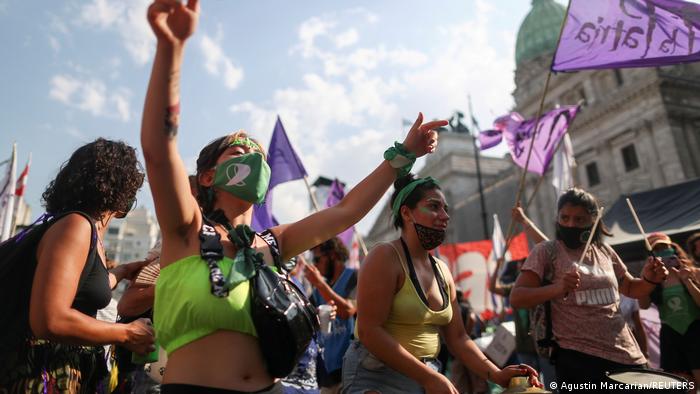 Argentina on Wednesday legalized abortion when the Senate voted by 38 to 29 in favor of a bill that allows the procedure through to the 14th week of pregnancy.

It became the first major country in Latin America, where there are growing calls for greater reproductive rights for women, to pass such a bill.

Senate president Cristina Kirchner confirmed the vote, which came after more than 12 hours of debate

A crowd of thousands cheered outside the Senate building in Buenos Aires, waving the green flags that have come to represent their campaign. Green smoke also rose above the crowd.

"We did it, sisters. We made history. We did it together. There are no words for this moment. It touches our body and soul," tweeted Monica Macha, a lawmaker with the center-left coalition of President Alberto Fernandez.

Under the previous law, abortions were only allowed in the case of rape or when pregnancy carries serious risks for the mother's life. Across Latin America, abortions on demand are only available in Cuba, Argentina's much smaller neighbor Uruguay, and in certain parts of Mexico.

The country's Chamber of Deputies approved the bill earlier this month before sending it to the 72-seat Senate.

The initiative was spearheaded by President Alberto Fernandez and his left-leaning ruling bloc. However, not all lawmakers in his camp were in favor of the changes.

The debate was heavily influenced by the country's powerful Catholic Church, which formed an alliance with the evangelicals in a bid to bury the bill. Some 62% of Argentinians identify themselves as Catholic, while over 15% declare themselves as evangelicals.

Pope Francis, who is Argentinian, mostly stayed silent on the debate until Tuesday evening. Hours before the Senate discussion was set to start, however, Francis tweeted what could be interpreted as support to the anti-abortion side.

"The Son of God was born discarded to tell us that every person discarded is a child of God. He came into the world as a child does, weak and fragile, so that we can embrace our weaknesses with tenderness," the pope wrote.

Most countries in Latin America impose heavy restrictions on abortion, mostly due to the influence of the Catholic Church. Voluntary abortion is legal only in Cuba, Uruguay, Guyana and parts of Mexico.