A gate bearing an infamous Nazi slogan has been stolen from the former Dachau concentration camp north of Munich. The theft has been deemed an "offensive attack on the memory of the Holocaust." 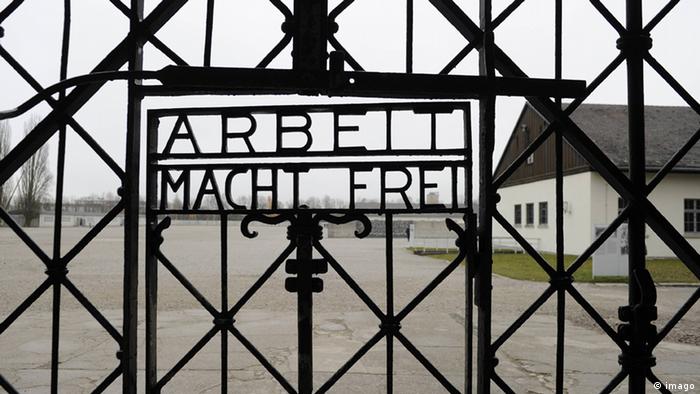 An iron gate with the infamous Nazi slogan "Arbeit macht frei" (work sets you free) at the former concentration camp of Dachau in southern Germany has been stolen, police said Sunday.

The theft of the gate, which measures about two meters by one meter, apparently happened overnight. Police said that whoever stole the gate would have had to have climbed over another gate in order to reach it.

A search of the area's immediate vicinity revealed nothing, and police are appealing to the public for help identifying any suspicious activity the night of the theft. The gate is monitored by security guards and the theft apparently took place between their rounds of the camp, police said. There are no security cameras at the site of the theft.

Dachau, which is located a few kilometers north of Munich, was the first concentration camp established by the Nazis in 1933. It was initially set up to incarcerate political prisoners before becoming a death camp during World War II. Over 40,000 people died there before it was liberated by US forces in April 1945. The camp now serves as a memorial.

Karl Freller, head of the foundation of memorial sites in Bavaria, said the theft was an "ignoble act."

In 2009, the infamous 'Arbeit Macht Frei' sign was stolen from the main gate of the Auschwitz extermination camp set up by the Nazis in occupied Poland. A Swedish neo-Nazi and five Poles were convicted of that theft and imprisoned.

The Auschwitz sign was discovered cut into three pieces several days later in a Polish forest and was restored in 2011.

Israel's Yad Vashem Holocaust memorial has also condemned the theft. A blog post on their website said, "While we do not know who is behind the theft of the sign, the theft of such a symbolic object is an offensive attack on the memory of the Holocaust."

Holocaust survivors speak out in Berlin

They managed to survive the deadly cruelties of the Third Reich. Now - almost 60 years later - six Holocaust survivors from Vienna take the stage at a Berlin theater festival to tell their captivating stories. (15.05.2014)

Almost a month after a Swedish court allowed his extradition, Stockholm has turned over Anders Hoegstroem to Polish authorities to face charges for organizing the theft of the Auschwitz "Arbeit Macht Frei" sign. (10.04.2010)