Apple, the stock market and a trillion dollars | Business| Economy and finance news from a German perspective | DW | 03.08.2018

Apple, the stock market and a trillion dollars

The iPhone maker is now worth a trillion dollars on the stock market, the first US company to ever to achieve this prize. But does this market valuation really reflect the company's success? 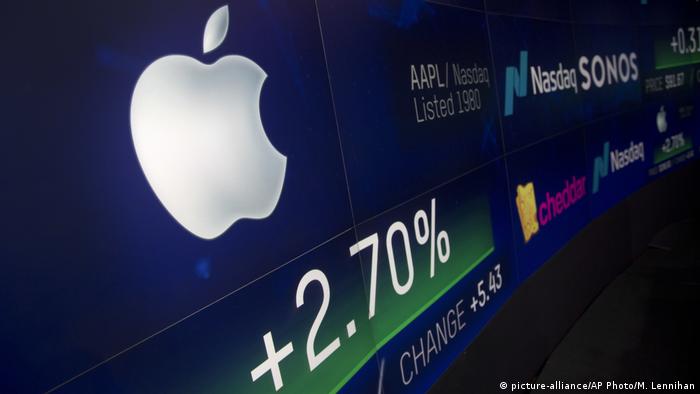 It's Thursday, August 2, just before noon on New York's Nasdaq. The stock price of Apple inched up to a value of $207.39 (€179.16). It's a historic moment. The company has just reached a market capitalization of $1 trillion. The magical line that had not been crossed by any US company before.

"I think it's scary that anybody is that strong," says senior index analyst Howard Silverblatt when looking at the company's market power. "It's something to watch and always be concerned about. They are an entity in and of themselves."

In fact, if Apple were a country, there would only be 16 countries in the world that are richer. Steve Jobs would never have dreamed this when he founded the company in his parents' garage in 1976. At that time Apple was an outsider alongside big players like Microsoft and IBM.

Four years later, the company was listed on the stock exchange at the bargain price of $22 a share. Since then, the price has increased by 40,000 percent. Anyone who invested $10,000 in Apple at the time is now fabulously wealthy.

With the iPod and the iPhone, the company from Cupertino which came from such humble beginnings, survived the brink of bankruptcy and became the most profitable corporation in the world within 20 years. In the last quarter alone, Apple generated well over $50 billion in revenues.

The loyalty of customers to the brand seems unbroken and iPhones, iPads and MacBooks determine the lives of many Americans. It's no surprise to Silverblatt that the company is the most valuable in the world.

However, Apple can not rest on its past success. "Right now, Apple is hot. Does it mean that it's going to be hot in a year? No!" says Silverblatt. Even if everything is going Apple's way at the moment, the competition is not sleeping. "The next Apple competitor is an 18-year-old sitting in a garage somewhere," he added.

Critics believe Apple is no longer breaking new ground in terms of innovation. Since the death of founder Steve Jobs in 2011 the company hasn't produces a "real hit," according to analyst Robert Enderle.

The smart HomePod loudspeaker, its latest attempt to open up a new market, has become an industry joke with its high price and limited functionality. Against this background the share price seems artificially inflated and does not reflect the true value of the company.

In fact, the stock price got help from the outside. The business-friendly US tax reform allowed the company to repatriate foreign earnings back home, leading to a multi-billion-dollar stock repurchase program. Over the past five years, the amount of stock has been reduced by 20 percent, through such buybacks.

In addition, a bull market that has been going on for eight years has helped the stock. Yet skeptics think if the mood in the market changes or tech stocks lose ground, things can change very quickly.

One reason why Apple is so profitable at the moment is due to the iPhone, the most expensive mobile phone on the market. "They are really relying on the iPhone at this moment," says Enderle. More than half of Apple's total revenue comes from the smartphone business. 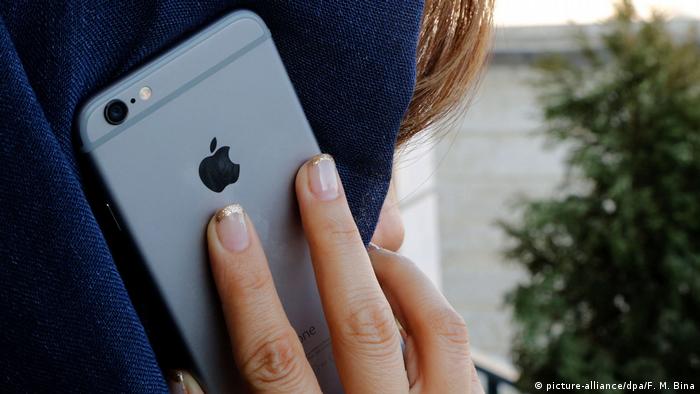 The iPhone has been central to Apple's irrepressible rise

Amazon, which is currently the second most valuable company in terms of stock market value, relies too much on growth instead of profit. In terms of market valuation, however, a profitable company would do better.

In order to remain number one, Apple is no longer just focusing on hardware products. One of the company's fastest growing business strand is in services such as the App Store, music downloads and iCloud storage. The annual revenue of the service sector with $35 billion alone is three times bigger than streaming service Netflix's revenue.

Apple, say advocates, has matured in recent years and has managed to remember its strengths instead of chasing after new innovations in new categories. The corporation is "the new Microsoft and that's a good thing," commented Marketwatch recently.

Despite the joy on the Nasdaq floor, the $1 trillion valuation is just marketing, says Silverblatt. Now the real challenge begins. "Next year will be a big test to see whether or not individuals will buy this at higher prices and what they will come out with."

The key question is whether Apple fans will continue to be willing to spend $1,000 or more for a mobile phone into the future and thereby keep pushing the company on to ever bigger records.