Samsung has chosen to settle rather than challenge a ruling that awarded Apple hundreds of millions of dollars last month. Apple had accused the Korean tech giant of copying its iPhone design. 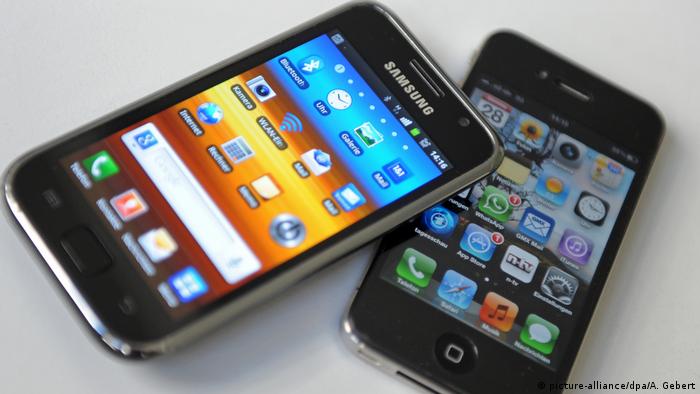 Technology giants Apple and Samsung have reached an undisclosed settlement to put an end to seven years of legal battling over patents to the iPhone design, according to a US court filing on Wednesday.

The legal dispute began in 2011, when Apple accused Samsung of copying the design and technology in its signature iPhone and iPad devices, at a height of consumer demand for smartphones. The patent war that followed between the two tech companies extended to about 50 cases in several countries.

At issue in Wednesday's settled case are three design patents that apply to the shape of the iPhone's black screen with rounded edges and a bezel, and the rows of colorful icons displayed. Apple argued that the designs were an integral part of the iPhone product.

Lawsuit reached the US Supreme Court

Samsung lost a 2012 trial over the matter and the judge ruled that the company had to pay a $1 billion (€864 million) settlement to Apple, which was eventually reduced to $548 million. The Korean electronics giant brought this up to the US Supreme Court, which in 2016 sent the case back to the lower court to reevaluate the financial penalty.

The lower court had to determine if the copied design features in the case were worth all the profits that Samsung made from the smartphones or only a fraction. In a victory for Apple, the jury awarded Apple $539 million, a figure close to what had been ruled in 2012.

Although Samsung had pledged to appeal, Wednesday's out-of-court settlement implies that the Korean tech giant decided not to fight it. Samsung did not comment on the settlement.

In a statement released last month after the jury awarded the damages, Apple celebrated the decision. "This case has always been about more than money," the statement read, emphasizing that it was important that the company "continue to protect the hard work and innovation of so many people at Apple."

The case has gained notoriety over the legal question of whether design is so integral that it could be considered the "article of design," even in products as complex as smartphones.

US tech giant Apple has reported a record-breaking final quarter of 2017. The company saw its profits soaring as stronger iPhone prices more than offset a decrease in its global smartphone sales. (02.02.2018)

South Korean prosecutors have raided the Samsung Group and the offices of the country's national pension fund. The swoop comes amid a scandal involving both organizations, as well as President Park Geun-hye. (23.11.2016)

The US will support a proposal to waive IP protections for coronavirus vaccines, Washington's top trade official has said. More than 100 countries want the temporary suspension of patents on COVID-19 vaccines.

A patent licensing dispute over microchips in cars has caused legal trouble in Germany for the US carmaker. Germany has notoriously strict patent laws.