Analysts say Apple's iPhone 7, unveiled Wednesday, represents another evolution, not a revolution, of its flagship gadget. So what's the plan for the company's more than $200 billion in spare cash? 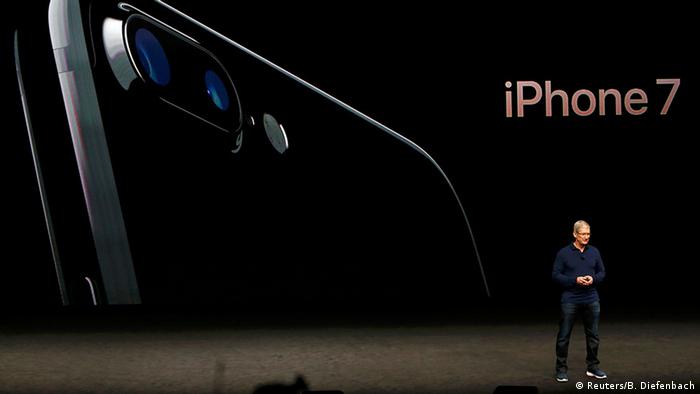 Once a year, Apple hosts a September event where it unveils new products - and for nearly the past decade, the main focus at the annual 'reveal' has been on an updated iPhone. This year, though, an updated Apple Watch with a better battery, a new dual-core processor, and a built-in GPS capacity was the first new product to be released at the Apple event on Wednesday.

Apple's keynote event took place in front of an invitation-only audience at the Bill Graham Civic Auditorium in San Francisco, California - and in front of anyone who wanted to watch it from home on their Safari browser, since Apple livestreamed the event on its website.

The Apple Watch Series 2 has been "completely re-engineered," according to Apple operations chief Jeff Williams, who went on stage in San Francisco (SF) to launch the revised gadget. Its headline feature: the Series 2 is water resistant to 50 meters (164 feet), making it ready for swims during beach holidays. 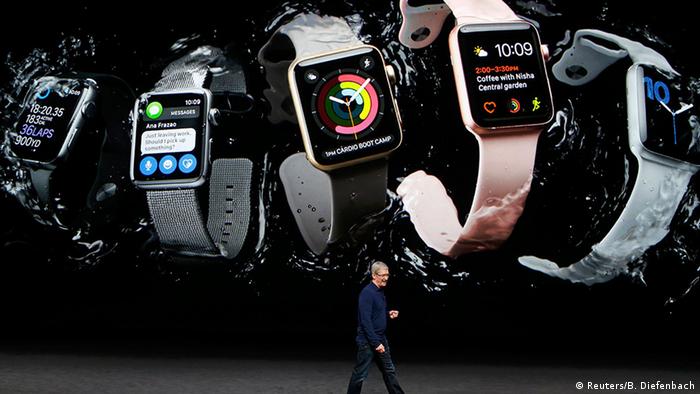 Pokemon Go will be available on the Apple Watch. John Hanke, CEO of Pokemon Go developer Niantic, told the audience in SF that the app has been downloaded 500 million times, and players have walked 4.6 billion kilometers (2.8 billion miles) playing the game. A round of Pokemon Go counts as a workout in the Watch's activity goals log. Could this be what finally makes Americans stop getting ever more obese?

Tim Cook said apps have been downloaded from the App Store more than 140 billion times since the Store opened in 2008. In each of the past two months, he added, app downloads had seen phenomenal growth rates in excess of 100 percent year-on-year. He also claimed that global revenues from app sales were over twice that of the App Store's "closest competitor," by which he presumably meant the Google Play store.

Nintendo is bringing Super Mario to the App Store. The game's creator, Shigeru Miyamoto, came on stage in SF to big cheers, and said: "We want as many people as possible all around the world to play Mario, and they'll be doing it first on iOS."

The first game available will be called Super Mario Run, and will be available before Christmas. Miyamoto said it will have "one price," a flat fee, to prevent kids from wasting their money on in-app payments - a solid ethical commitment. 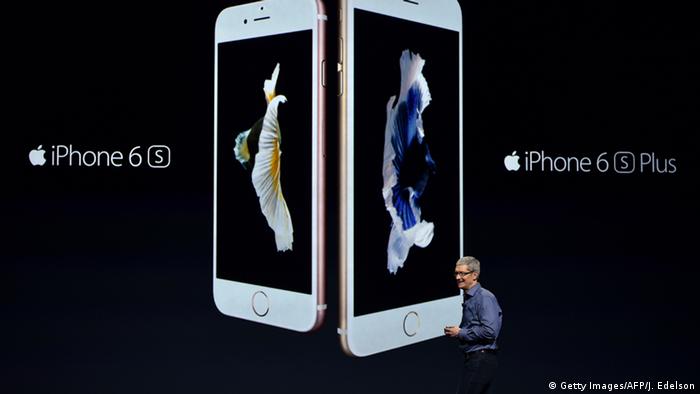 This autumn's new edition of the flagship iPhone is the iPhone 7. It comes in five colors - a high-gloss 'jet black,' plus 'just black,' gold, silver, and rose gold. Novelties compared to the iPhone 6:

The 'home' button has been re-engineered. It's force-sensitive, with haptic feedback, which means it vibrates when a message comes in.

The iPhone 7 Plus has a better camera - a wider-aperture, six-element dual-lens camera. One lens is the regular wide-angle, the other is a telephoto lens. Using both together achieves a telephoto effect without needing a bulky telephoto lens.

However, some of the software to make optimal use of the dual-lens system in the 7 Plus isn't available yet. It'll be released as a software update later this year.

Further camera upgrade news: The image optimization feature has been extended from high-end devices to all iPhones. The new camera chip, or 'image sensor processor,' has twice the capacity of the previous version. Phil Schiller, senior VP of worldwide marketing, said that means the 7 can generate even better high-definition images. 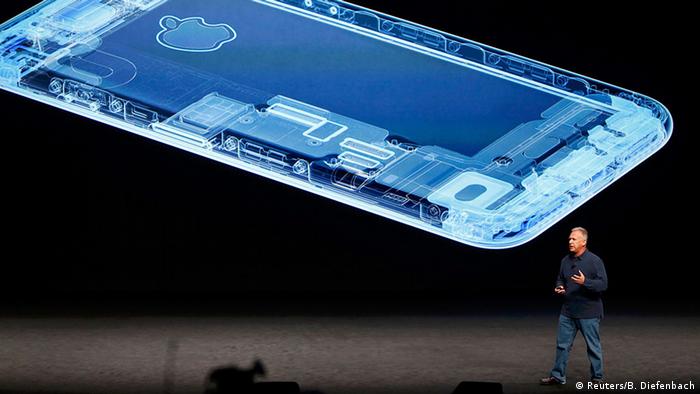 A controversial move on the iPhone launch has been the replacement of the standard, universally compatible 3.5 mm audio headphone socket with a socket for Apple's new 'Lightning' headphones.

Marketing chief Schiller said: "We are taking the headphones to Lightning and including them in the box" with the iPhone 7. But Apple is also bundling an adaptor for the standard 3.5 mm headphone socket with every new iPhone. So, it's 'no worries, mate' for those who have favorite headphones equipped with 3.5 mm jacks.

There is, of course, also a new, faster processor in the iPhone 7. Called the A10, it's a quad-core processor that's twice as fast as the A8 from two years ago. Two of the four cores are more power-efficient, so tasks are allocated to those when possible, to save on battery juice.

Where's the next revolution?

All these changes, and many others were evolutionary, incremental improvements, rather than big, bold, pathbreaking new products.

The company has introduced pathbreaking new products in the past, so perhaps the attention on Apple's annual dog-and-pony show in San Francisco is justified. But 2016 isn't destined to be a pathbreaking year for Apple. 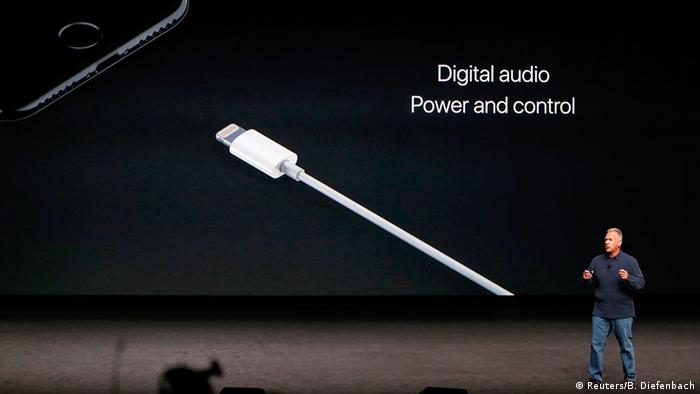 Phil Schiller: the Lightning connector will be standard on new headphones

The biggest new-new thing Apple has put on the market in recent years was the Apple Watch. To some analysts, that's a bit worrying - especially with smartphone sales plateauing in an ever-more competitive market.

"Apple is a company that lived hit to hit: the iPod, iPhone, iPad," said independent Silicon Valley analyst Rob Enderle of Enderle Group. "Without those successive hits, it is struggling. While it has plenty of cash, it has stopped being a market maker."

Perhaps "struggling" is something of an overstatement. Apple is one of the world's most valuable publicly traded companies, at $581 billion (517 billion euros) in market capitalization as of September 6, 2016.

It's also raking in gigantic profits. On October 27, 2015, at the end of its fiscal year, Apple reported what the Financial Times suggested was the biggest annual profit of any company in history, with net income of $53.4 billion, and a very fat gross margin of just under 40 percent.

"Fiscal 2015 was Apple's most successful year ever, with revenue growing 28 percent to nearly $234 billion," CEO Tim Cook announced at the time. Nearly two-thirds - 62 percent - of sales were made outside the US.

So really, the company can hardly be said to be struggling - except, perhaps, struggling to figure out what to do with the giant river of cash constantly flowing its way.

The company's pile of accumulated cash is, like its market cap and profits, insanely large in its dimensions. According to its most recent earnings report, Apple had $231.5 billion in cash plus marketable securities (near-cash investment assets) at the end of June 2016.

That's about the same amount of money as Finland's or Ireland's or Chile's GDP -- i.e. Apple's pile of cash is as valuable as all the goods and services produced last year by everyone in Finland, or Ireland, or Chile in an entire year.

That's a heck of a lot of money. So why is Apple sitting on that gigantic pile of cash?

The mystery of Apple's golden hoard

Generally, if they're in the happy position of having any excess cash, companies either invest it in new projects, or they distribute it to their shareholders. They may keep a bit of a cash buffer for emergencies as well. But Apple has been hoarding vast sums of cash for years. The size of its cash pile is about the same size as one year's revenues. That's unusual for any company.

Apple is reported to be working on some interesting projects, including a self-driving automobile, and sophisticated virtual reality (VR) entertainment systems. The world may need to wait until those are market-ready for a really exciting September keynote in California, sometime in the next few years. 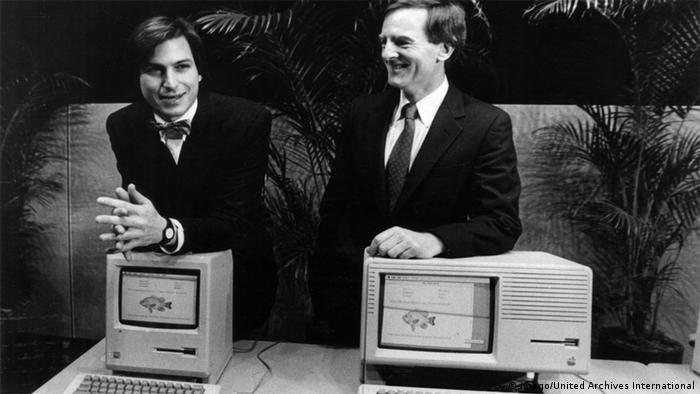 But analysts wonder why the company isn't spending more of its cash hoard on investing even more aggressively in revolutionary new technologies.

According to the European Union's Competition Commissioner Margrathe Vestager, Apple doesn't spend all that much money on paying taxes, either, as a controversy over Apple's use of Ireland as a tax haven to shelter most of its global profits has revealed.

Even if the corporation ends up having to pay 13 billion euros in back taxes to Ireland as demanded by Vestager's department - both Apple and the government of Ireland say they will contest the EU's ruling - it will still have a hoard of well over $200 billion in cash available to invest in new technology projects.

So what's keeping Tim Cook from doing just that? He didn't say anything on this issue during Wednesday's presentation. But that doesn't keep puzzled analysts from wondering…