Security versus privacy - it's a dilemma that all anti-terror legislation must address. A new commission has only six months to examine Germany's anti-terror laws. 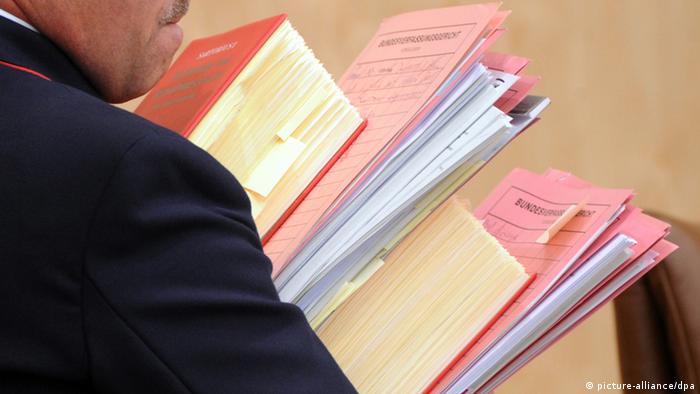 "Since September 11, around the world and in Germany we've had a plethora of new laws that were introduced at the highest speed," Burkhard Hirsch, a civil liberties advocate who is a member of Germany's classical liberal Free Democratic Party, told DW. "This has significantly changed what is euphemistically known as the security architecture."

These laws are the reason for the expert commission scheduled to begin its work on Monday (28.01.13), led by Justice Minister Sabine Leutheusser-Schnarrenberger. Its role is to assess the anti-terrorism legislation passed since September 11, 2001 and to draw conclusions from the failure to catch the killers from the National Socialist Underground neo-Nazi cell responsible for 10 murders in Germany.

The far-reaching "proactive enhancement of control and intervention options in order to identify and eradicate terrorist and extremist threat in time" has great sociopolitical relevance, Hirsch said. "It has affected police and intelligence operations - and it's high time to take stock of the situation and ask whether everything has been done in accordance with the rule of law, or if we're heading in the direction of a surveillance state."

Although past decade's laws have been subjected to legal scrutiny, nobody has yet carried out a large-scale assessment. Especially sensitive is the topic of the relationship between data protection and security - an area where the commission has to take an unambiguous position. In particular, the issue of data retention - the surveillance and saving of data-related telecommunications processes, which could potentially aid the preparation of a terrorist attack - has sparked heated debates in recent years.

The commission aims to address some sensitive areas within Germany's security architecture, such as the law giving special rights to the Office for the Protection of the Constitution, Germany's internal security agency. Following the September 11 attacks, the agency was given access rights to data held by aviation, postal and telecommunication companies with the goal of improving the monitoring of terror suspects. There are also laws that allow for tighter control of suspects' financial resources. The commission's investigation will focus on laws pertaining to intelligence-gathering and police activities targeting terrorism.

The investigation will be overseen by experts in relevant fields. One of these is political science professor Heinrich Amadeus Wolff, who lectures at universities in the eastern German city of Frankfurt (Oder) and Dublin. In an interview with DW he explained that the sensitivity of this issue can be linked to the historic burden of the Third Reich, when the security structure was controlled by a totalitarian regime.

"We don't want any secret police, powerful federal police or intelligence agencies on the federal level with executive powers," Wolff said. In the context of states' rights, it's "always a problem when it comes to dividing up responsibility. In the area of security, the states have a lot of pull in terms of the general right to police. But the federal government holds sway when it comes to intelligence. This leads to a situation where the federal government has an interest in viewing all issues as intelligence matters because it can then assume responsibility for them."

The commission has the unenviable task of mastering this tense situation - and in a short time.

The experts are under greater pressure than initially planned: The cabinet decided to set up a temporary committee to examine security laws back in August 2012. At that time it was envisaged that a full year would be available - now the experts have just a few months, from the end of January until the national elections in the autumn.

In reality, the timeframe is even shorter, because the mid-year election campaign will make "an objective discussion virtually impossible," Wolff said. "It's not a particularly fortunate situation that a committee of experts - the first step of a reform - should convene six months before the end of a legislative period." He said he also sees "a great danger that the commission will become an instrument of the bureaucracy."

Anetta Kahane, an expert in right-wing terrorism at the Antonio Amadeu Foundation, shares this view: "Germany is good at setting up commissions, and usually they produce very little." Her foundation is therefore committed to the fight against a far-right everyday culture.

It would have been possible to respond to the Zwickau terrorist cell much earlier, for example, "if attention had been paid to the tips that came from members of the public," she said.

Kahane points to the investigative blunders that stricter security laws would hardly have prevented: "In the late 1990s the focus was on making it known that there was a highly aggressive neo-Nazi scene in Thuringia that co-operated, in part, with the Office for the Protection of the Constitution," she said.

"All my colleagues at the time had the same experience: We tried to make the excessive closeness between the far-right scene and the internal security agency known in the political sphere. We were told that if our information was even true at all, there was a good reason for everything."

She is therefore calling above all for improved cooperation between the present state institutions and existing civic groups "on an equal basis."

Germany to ban most workplace surveillance

With a new law, the German government wants to prevent employers from secretly videotaping their employees. But experts are criticizing the legislation, saying it still allows surveillance. (15.01.2013)

Perhaps Germany should look to the UK - the CCTV center of the world - as the former debates whether to use more public cameras after a murder in Berlin and a bomb plot in Bonn. In both cases, no footage was on hand. (18.12.2012)