Where to store Germany's nuclear waste? The issue – decades old and still unresolved – has injected controversy into campaigning ahead of Germany’s federal election on 27 September. 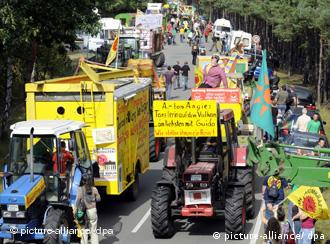 Farm residents at Gorleben in northern Germany have long opposed a proposal that salt caverns under their feet be used as the nation's long-term underground nuclear waste disposal site.

Driving tractors, they have begun a week-long road trek to Berlin to press their anti-nuclear case. Equipped with a rolling kitchen, they aim to spearhead a demonstration in the capital next Saturday. En route, the tractor trekkers plan stopovers at three other sites used variously as nuclear storages and all controversial - the former Konrad iron mine near Salzgitter; Asse, a mine with water leaks near Wolfenbüttel; and Morsleben, an old salt mine near the former East-West-German border. Nuclear industry proponents accuse detractors of exaggerating the risks.

The anti-nuclear lobby has drawn impetus from recent shutdowns at the Krummel nuclear power plant in the northern state of Schleswig- Holstein and new allegations dating back to 1982. According to the Frankfurter Rundschau newspaper, the then conservative-led government of Helmut Kohl pressured scientists to "sugarcoat" a report on storage prospects at Gorleben. The scientists were reportedly worried that sediment around the salt-cave was not impermeable enough to stop potential radiation leaks. 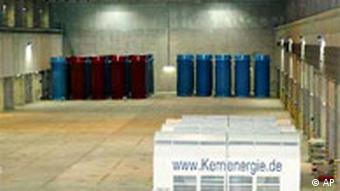 Added to that are land expropriation provisions that are due to expire at Gorleben in 2015. There's also been an official disclosure that another underground site, Asse, which is at risk because of alkaline groundwater leaching, contains 28 kilograms of highly radioactive Plutonium. That's three times the amount originally notified by nuclear authorities. Asse also stores 126,000 barrels of low and medium grade radioactive waste, dumped in the 1960s and 70s.

Nuclear power station phase-out due by 2021

The Social Democrats, who in 2000 under former chancellor Gerhard Schroeder, together with the Greens, saw through legislation to mothball Germany's 17 nuclear power generating reactors by 2021, have seized upon the nuclear issue in what had been otherwise a lacklustre federal election campaign.

Sigmar Gabriel is a Social Democrat from Lower Saxony state where Gorleben is located and also Federal Environment Minister in the outgoing coalition cabinet of conservative Christian Democrat Chancellor Angela Merkel. Gabriel says Gorleben, due to legalities, is now out of the question.

“The location Gorleben is dead as a final storage site. Responsible for this situation is the CDU which, come what may, wanted to force it through. It failed to acknowledge the need for a sensible site selection process. It failed to acknowledge international standards. And, it wanted, apparently, to force through Gorleben, with the same mistakes as at the salt dome Asse.” 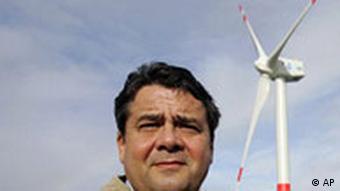 The Social Democrats insist that conservative-led regional governments in Germany's southern states of Baden-Wurttemburg and Bavaria look for alternative sites to Gorleben in their own backyards – sites capable of storing waste such as Plutonium which has a radioactive half-life of 24,000 years.

The rebuttal has come from Bavaria's own Environment Minister Markus Söder, a leading figure among Bavarian CSU conservatives who are allied with Chancellor Merkel. Söder accuses the Social Democrat Gabriel of exploiting Gorleben for electoral purposes. Gorleben, which lies nearly 500 kilometers to the north of Bavaria, is the best investigated long-term disposal site for Germany, Söder says.

“Gorleben is suitable. It's also clear that we don't have any alternative location, for example in Bavaria, because the clay layers that we have are too thin in comparison to salt domes. Granite has too many cracks, making it too dangerous. There is only one location, which has been well investigated. We should implement it. The taxpayers, by the way, have paid a lot of money for [Gorleben] – 1.5 billion euros.”

The pro-nuclear lobby group Deutsche Atomforum recently said German firms such as Siemens, OEN and RWE are tapping into renewed global interest, with over 30 reactors currently under construction worldwide.

Joining the fray are the Greens, who've long lobbied for alternative sustainable energy sources in Germany. Greens co-leader for the general election, Renate Kunast, says the government ran a campaign of obfuscation. 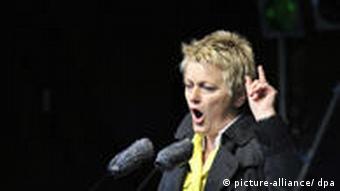 Renate Kunast says enough with the lies about Gorleben

“It's been discovered that the experts' report was falsified," she says.

"We were always told – Gorleben is suitable. And, now it has emerged that in 1982 the experts had had doubts and said other sites should be investigated, and that they were put under pressure from the-then government to delete some legislative elements.”

Fellow Greens candidate Juergen Trittin accuses Chancellor Merkel's coalition of not keeping its word in failing to complete an impartial search beyond Gorleben for an alternative site by the end of the legislative period in September.

Despite claims by nuclear advocates that atomic energy is needed in the energy mix alongside renewables – at least in the medium term to head off climate change and future oil price hikes – surveys in Germany show that a majority of Germans remain sceptical about the nuclear industry, in part also because of the potential that terrorists could target nuclear facilities.

Past shipments of reprocessed German nuclear waste from France to Gorleben have drawn extensive protests watched over by large squads of police.

A new survey by the polling institute Forsa show that 57 percent of Germany's residents still favour the legislated phasing out of nuclear power stations by 2021. That leaves a minority of 38 percent who would tolerate longer usage of nuclear power.

After watching her rivals take blow after blow in the run-up to parliamentary elections, German Chancellor Angela Merkel faces criticism for reportedly ignoring warnings about a nuclear waste dump. (06.08.2009)

An internal report by the Federal Office for Radiation Protection has triggered allegations that the Gorleben salt mine was already being turned into a storage site for radioactive material in the mid 1980s. (28.05.2009)