Sweden's prime minister has not been able to come to an agreement with a majority opposition coalition regarding next year's budget. A far-right anti-immigration party is forcing his government to its knees. 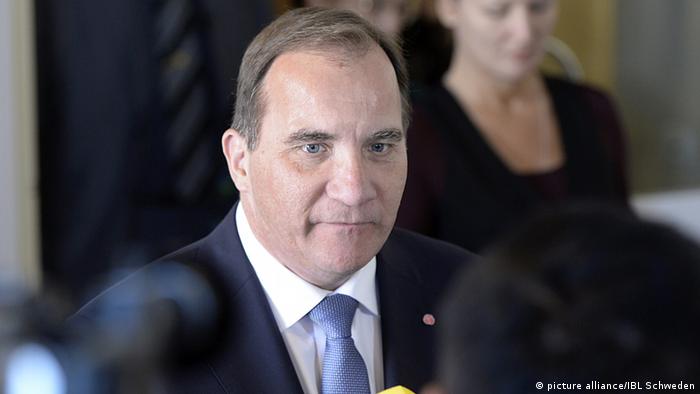 Stefan Lofven's government is in trouble

After just a few months in office, the minority, center-left Swedish government teetered on the brink of collapse on Tuesday, after the far-right Sweden Democrat party said it would side with the opposition to vote against a proposal for the 2015 budget, which is set to take place on Wednesday.

The anti-immigration Sweden Democrat party, which holds the balance of power in parliament, said it would support an alternative budget proposed by the centre-right Alliance opposition bloc, thus isolating the government, which took over from an eight-year, center-right government after September 14 elections.

"There is no one on the other side of the table, it is meaningless to hold talks," Lofven told reporters after the meeting at the government headquarters, saying he would decide what to do after the debate in parliament on Wednesday.

He could withdraw the proposal, which would postpone Wednesday's vote, resign and try to put a new government together or wait until December 29 to call a snap election - which hasn't happened in Sweden since 1958. If the latter option were to happen, elections would take place within the following three months.

"We may call snap elections later, when the constitution allows. We could also resign and there are other alternatives," he said late Tuesday.

Acting Sweden Democrat leader Mattias Karlsson said his party was seeking to force a reversal of Sweden's generous immigration laws. He said his party would "topple any government that tries to allow increased immigration and gives the Greens a decisive role over Swedish immigration policies."

He also threatened: "If the Alliance doesn't change its policies (on immigration), we would try to bring down a government of those parties too."

His party wants to cut immigration by 50 to 90 percent - something the other parties aren't really concerned with.

Lofven criticized the Sweden Democrats, saying it was "exceptionally irresponsible" that they were rebelling against the budget. He added that they "aim to knock out any government that doesn't dance to their tune."

In the new budget, the Social Democrats and the Greens are proposing to increase taxes to afford more spending for schools, welfare programs and job creation. The Alliance, however, wishes to have more cautious spending.

Using the budget argument, the far-right Sweden Democrats say they want to cut costs which arise from immigration. This argument was effective in the last election in September, in which the party doubled its support to become the third largest party in parliament.

The opposition Alliance consists of the Moderate, Center, Christian Democrat and Liberal parties. They stood their ground in talks on Tuesday, vowing to not budge from their pledge to vote for their own budget bill on Wednesday.

Lofven risks becoming the country's shortest-serving leader since the 1930s.

Wikileaks founder Julian Assange has lost his appeal against a Swedish arrest order. Assange, stuck in Ecuador's London embassy, is wanted for questioning on alleged sexual misconduct, but currently faces no charges. (20.11.2014)

Sweden has announced that it will officially recognize the state of Palestine on Thursday. It will become the first EU member in western Europe to do so, in a move strongly condemned by Israel. (30.10.2014)