The ancient bones of a small band of men, women and children have been found in East Africa. Scientists believe this discovery can lead to a better understanding of warfare. 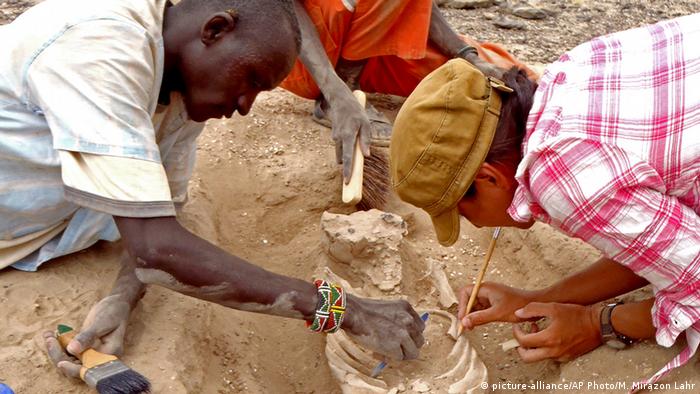 Anthropologists presented on Wednesday the 10,000-year-old remains, which were discovered near Kenya's Lake Turkana.

The bones show rare evidence of a mass killing among hunter-gatherer tribes and could shed light on the roots of modern warfare.

Among the remains were 10 to 12 more-or-less-complete adult skeletons, which showed signs of having been wounded by arrows or clubbed to death. Also found were the scattered remains of other people - including children - who were killed, including some who might have been tied up prior to their deaths.

The gravesite was first discovered back in 2012. The scientists who presented about it were from Cambridge University and other universities.

According to the panel, the grave site is one of the clearest examples of violence between prehistoric tribes. Warfare is an important subject among anthropologists, and the question of whether or not war-making is an inherent human trait remains controversial and unanswered.

It was not clear to the scientists what the motivation was behind the mass killing.

Scientists in South Africa have announced the discovery of a new species of human called "Homo naledi." The find, which includes bones from 15 bodies, has been hailed as a "breakthrough" in evolutionary research. (10.09.2015)

No pain, no gain: Why we still speak in proverbs

From "early bird" to "gift horse," there's a proverb for every situation. While they don't hold absolute truth, parents and advertisers find them useful. Wolfgang Mieder tells DW how to create one - and how they die. (28.10.2015)

Archaeologists have discovered a huge ceremonial skull rack in Mexico dating from the time of the Aztecs. The find could shed new light on how the empire’s rulers projected their power using human sacrifice. (21.08.2015)