In a Vanity Fair interview, the actress and director opened up about her difficult past year, revealing that she had developed Bell's palsy. Jolie says she has been focusing on "becoming a better mom." 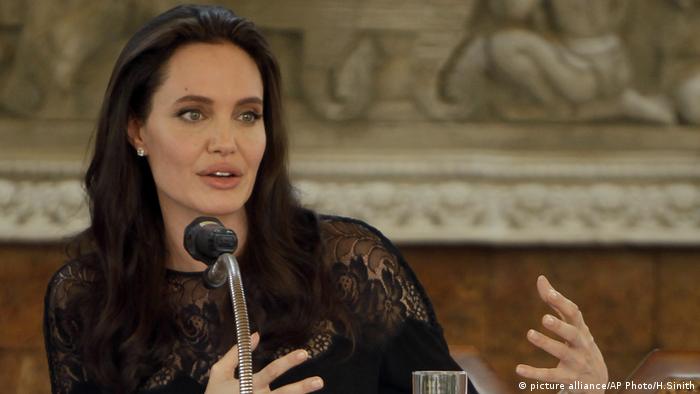 While Brad Pitt had discussed his alcohol problems and the end of "Brangelina" in a GQ interview last May, Angelina Jolie had kept quiet about the famous couple's split after filing for divorce in September 2016 - until now.

She openly discussed her hardships in a Vanity Fair interview released on Wednesday.

She says she's been focusing on household chores to deal with her new situation: "I've been trying for nine months to be really good at just being a homemaker and picking up dog poop and cleaning dishes and reading bedtime stories," she told the magazine.

"It's just been the hardest time, and we're just kind of coming up for air," she added. The 42-year-old actress, filmmaker, humanitarian and mother of six recently moved into a $25 million, six-bedroom, 10-bathroom home in Los Angeles.

As a UN Goodwill Ambassador, Jolie's family was used to a globe-trotting lifestyle with Pitt. In the Vanity Fair interview, she recounted once joking to her youngest son Knox about how they were now pretending to be normal, to which he replied, "'Who wants to be normal? We're not normal. Let's never be normal.'"

My picture of the week | Brangelina and the burden of fame

Jolie revealed different health problems she has also been dealing with since her split from Brad. She developed hypertension, and Bell's palsy - a weakness in facial muscles that can cause one side of the face to droop slightly. She said she recovered thanks to acupuncture.

The star has been open about her health challenges in the past. She wrote in the New York Times in 2013 about her preventative double mastectomy to prevent an aggressive form of cancer that killed many women in her family. She also had her ovaries removed two years later.

A film on the Khmer Rouge genocide

Although she is not currently working on a film, Jolie is promoting her latest work as a director, an adaption of her friend Loung Ung's 2000 memoir, "First They Killed My Father."

It is about the genocide in Cambodia that claimed Ung's parents and siblings. More than 1 million people died under the Khmer Rouge regime in the 1970s.

Angelina Jolie's film "First They Killed My Father" premiered in Cambodia in February and will be released globally and on Netflix in September.

Angelina Jolie wrote, directed, produced and stars in "By the Sea," a film released in theaters in Germany on December 10. Here's a look back at the most memorable events of her high-profile career. (10.12.2015)