Angela Merkel′s Syrian ′daughter′ will not forget her | Germany | News and in-depth reporting from Berlin and beyond | DW | 07.12.2021

Angela Merkel's Syrian 'daughter' will not forget her

"We can do it," Germany's outgoing Chancellor Angela Merkel said during the influx of refugees in 2015. One Syrian family named their daughter after her — and six years on, they still hold her in high esteem. 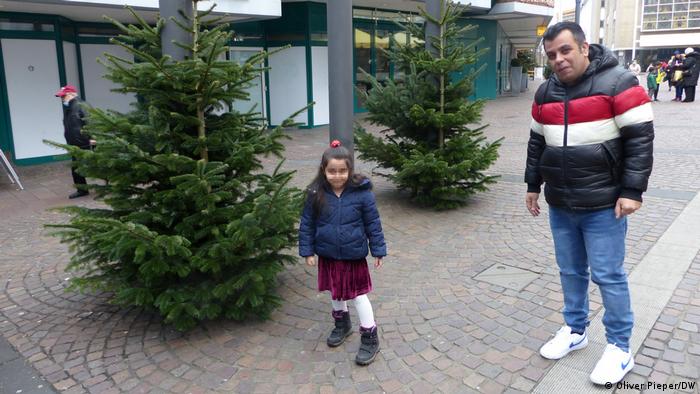 At the end of 2015, Syrian refugees Widad and Mohammed had an appointment with a gynecologist in Germany. The couple and their three children had fled their home city of Latakia, traveling initially by car and later on foot. During the journey, Widad was already pregnant.

After looking at the ultrasound pictures, the doctors congratulated the couple: A daughter was on the way. Widad and Mohammed did not have to think long about what to call their child. They named her after the German chancellor, their guardian angel: Angela.

Six years later, a little girl with long, dark hair in wine-red dress struts through the Caritas counseling center for refugees in the western city of Gelsenkirchen and is greeted with joy by everyone.

"Hi, Angie," "Hello, Angie," "Good morning, Angie." Angela, whom everyone just calls "Angie," smiles happily and returns the greetings. A child who looks like her is at home in Germany. Her first name can be both a point of pride and a burden.

"Everyone loves our daughter Angela; even the older women in our neighborhood are always very happy when they see her," her father Mohammed explained. "And we love Angela Merkel for what she has done for us."

Admiration for the longtime chancellor

The phenomenon may seem strange at first glance. Many Germans are still wary of the outgoing chancellor, even after her 16 years in office.

Six-year-old Angie sees her famous namesake every day, even on her screensaver at home.

"While other countries closed their doors, Merkel gave us a new life, especially the children here," Mohammed said. "All our Syrian friends are sad that Merkel is leaving office now. My mother in Syria always says to me on the phone, 'Very sad, what will become of her now?'"

Little Angela is currently at kindergarten, but she will follow her three big siblings to school next August. She loves to tell stories, to paint, preferably flowers, and has also been twice to the soccer stadium of her local team, Schalke 04.

When she grows up, she says shyly, she wants to do "Something like Angela Merkel, that is, helping other people." 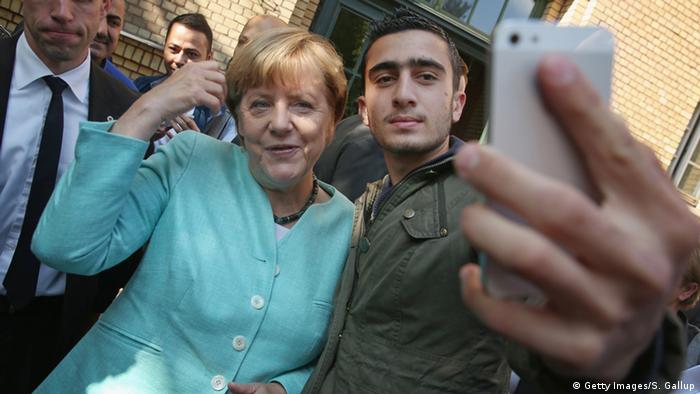 How successfully have refugees integrated?

The story of the happy Syrian family of course becomes a little more nuanced in the wider context of the 2015 refugee crisis. When little Angela came into the world in Gelsenkirchen in early 2016, Germany was in the process of shifting from a globally respected welcoming country to a land rife with fear.

The little Syrian girl with the chancellor's name was born as Germany experienced a sea change. In the nearby city of Cologne a flood of applications for gun licenses was reported — shortly after groups of men, some of which were men of non-German descent, sexually assaulted hundreds of women on New Year's Eve.

Chancellor Angela Merkel recently said: wir haben das geschafft ("We did it!"), when taking stock of Germany's migration policy, a nod to her famous 2015 claim as migrants began to arrive in large numbers that "Wir schaffen das" — "We can do it."

But perhaps little Angela's life captures quite well how the integration of many of the refugees who arrived in 2015 has worked out at large. The children speak fluent German, have German friends, and have good grades at school.

But their parents, on the other hand, are still struggling to find their feet in their new home. Mohammed wants to open a corner shop soon, and his wife, who was a teacher in Syria, wants to work as a kindergarten teacher. According to statistics from the Institute for Employment Research, IAB, just half of the refugees who arrived in 2015 have a job.

"If I had to give Angie's family a grade for integration on a scale of 1 to 10, I would give you a 5," said Marwan Mohamed. He should know; Mohamed came to Germany from Syria in 1995 — to a country where, at the time, there was no dedicated counseling center for new arrivals.

Now Mohamed is a lawyer at the Caritas refugee counseling service, where he is responsible for everything to do with residency rights. Little Angela and her family have a residence permit. In three years they want to apply for German citizenship.

"Many refugees have moved here because they couldn't find free apartments in Munich or Cologne, but there is still enough free housing here," Mohamed explained.

Language is key to integration

It is the large foreign-born population in the city that may make integration more difficult, Mohamed pointed out.

"Refugees in other cities often integrate more quickly because they are forced to speak German and make contact with the locals," he said. "Here, for many, it's like in their home country because they can speak Arabic in the stores. And then, on the other hand, there are many Germans who don't want to have anything to do with the refugees."

But Marwan Mohamed and his team at Caritas aren't giving up. When the coronavirus pandemic broke out last year and masks were also desperately needed in Gelsenkirchen, the refugees produced 7,000 of them at record speed. The men procured fabric, the women cut and sewed them using instructions from the internet, and the men in turn distributed them in old people's homes.

A few months ago, a group of Syrian helpers set out for areas nearby that were devastated by summer flooding. They contributed actively to helping the German locals clean up and rebuild after the worst floods in memory, garnering headlines for their solidarity.

"We can do it," could also be Mohamed's motto. In any case, Merkel's famous phrase will live on in Gelsenkirchen even after the chancellor's departure, especially among the refugees themselves and little Angela's family.

"I have yet to meet anyone here who has spoken badly of Angela Merkel; all the refugees respect her," Marwan Mohamed said. "She gave children like little Angie a new home."