Germany does not recognize Alexander Lukashenko as the winner of August's disputed election in Belarus. Opposition leader Tsikhanouskaya has already met the French president and is now heading for talks in Berlin. 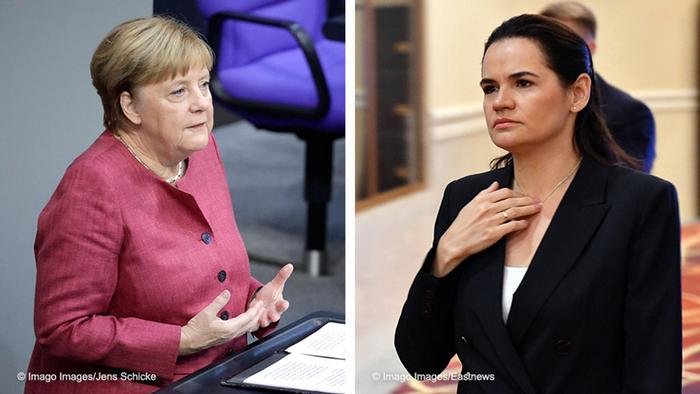 "The situation in Belarus after the presidential elections" will be the main topic of discussion, said Merkel's spokeswoman Ulrike Demmer announced Friday.

Merkel has said that Germany, which currently holds the EU's rotating presidency, does not recognize the result of the disputed August 9 election in Belarus, in which President Alexander Lukashenko has claimed victory.

Merkel told reporters Friday that a range of sanctions imposed on Belarus by the EU were "important to strengthen those who want freedom of speech."

Protesters have taken to the streets of Belarusian cities since Lukashenko claimed a sixth term with 80% of the vote in the presidential election.

Riot police have detained thousands of protesters who have reported torture and abuse in custody.

"When you see the courage shown by the women who are appearing on the streets for a free life without corruption, then I can only say: I admire that and find it truly impressive," she told German lawmakers on Wednesday.

Tsikhanouskaya fled Belarus in the days following the election after claiming victory and accusing Lukashenko of rigging the vote.