Chancellor Angela Merkel has defended Germany's troubled vaccine rollout. In an interview with German public broadcaster ARD, she urged everyone to "hold on a while longer." 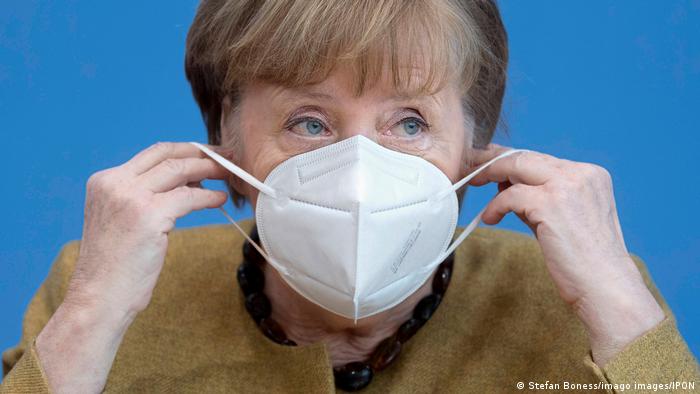 Despite delays, Merkel has renewed her promise to offer every adult in Germany a vaccine summer's end

Russia's coronavirus vaccine could be used in the EU if it receives regulatory approval, German Chancellor Angela Merkel said on Tuesday.

Merkel added that she spoke recently with Russian President Vladimir Putin about the vaccine.

The Sputnik V vaccine was found to be over 91% effective against COVID-19, according to trial results that were published in medical journal The Lancet on Tuesday.

Previously, Russia drew skepticism and criticism for releasing the vaccine to the general population before publishing the phase III trial data.

What do Germans think about the vaccine?

The German chancellor also defended her government's handling of the vaccine rollout.

Merkel said Germany will have vaccinated 10 million people by the end of March, and held to her pledge of offering every resident a vaccine by the end of summer.

She called on everyone to "hold on a while longer."

Germany and the European Union have been struggling to increase the pace of vaccine distributions, particularly compared to the speed of vaccines in the United States, the United Kingdom and Israel.

"It is true that in some areas, the pace became slower, but there were good reasons for it to be slower," Merkel said.

"We can't make a rigid vaccination plan," she said, adding that it needs to be "dynamic" and adaptable to the the situation depending on supplies and deliveries.

1 year of coronavirus in Germany

Pointing to the levels of vaccine distrust in other countries, Merkel said the thorough approval process was necessary to ensure public trust and "confidence."

Although Germany's rate of infections has lowered to 100 new infections per 100,000 people in a week, Merkel said the country still has a ways to go before things are under control.

"That is a good achievement. We were not there for a long time. But we still don't have control over the virus through the local health departments," she said.

Merkel is due to hold talks with German state leaders on February 14 to discuss the country's lockdown measures.

While the leaders will discuss potential reopening scenarios, Merkel warned about a potential resurgence of cases if restrictions are eased too quickly.

"We need a sustainable path out of the pandemic," she said.

The chancellor said people could expect measures to be eased before everyone is vaccinated, but urged the public to stick to physical distancing and to work from home as much as possible.

Coronavirus: Germany open to Chinese and Russian vaccines amid delays

Health Minister Jens Spahn says there is no obstacle to the use of the Sputnik V and Sinopharm vaccines if they receive EU approval. Chancellor Angela Merkel is due to hold a summit Monday to overcome a vaccine shortage.