Germany will continue to support Iraq as part of the anti-IS coalition and a NATO police training mission, the chancellor has said. She praised Prime Minister Mustafa al-Kadhimi for his support of democratic reforms. 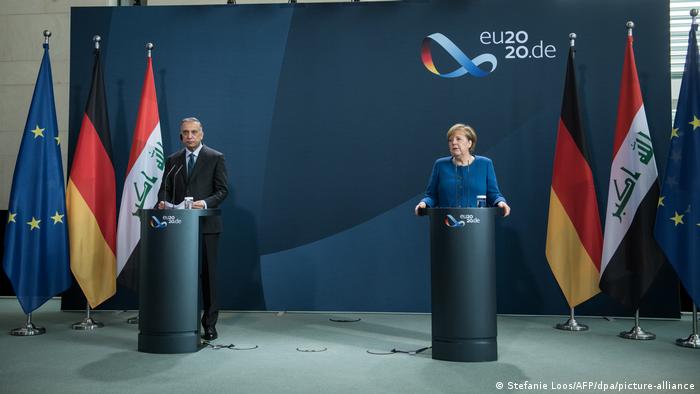 German Chancellor Angela Merkel met with Iraqi Prime Minister Mustafa al-Kadhimi on Tuesday in Berlin, where she pledged to continue to support the Middle Eastern country on security issues and during the coronavirus pandemic.

Mustafa al-Kadhimi has been prime minister since May, after a wave of mass anti-government protestsswept the country and led to the fall of the previous government under Prime Minister Adil Abdul-Mahdi.

During a joint press statement with al-Kadhimi, the German chancellor welcomed his government's "will to reform."

She said Kadhimi's government was pursuing a "very ambitious agenda" on issues such as fighting corruption, the rule of law, strengthening state institutions and the state's monopoly on the use of force.

That "ambitious agenda" included the announcement of early elections for June 2021. "Through these measures, the Iraqi people's confidence in state institutions can be strengthened," she said.

For his part, al-Kadhimi underscored his government's commitment to transparency in the elections. He thanked Germany for its "efforts to stabilize the region."

He added that his government was striving for increased cooperation with Germany in areas such as refugee policy and economic policy, particularly in the energy sector. 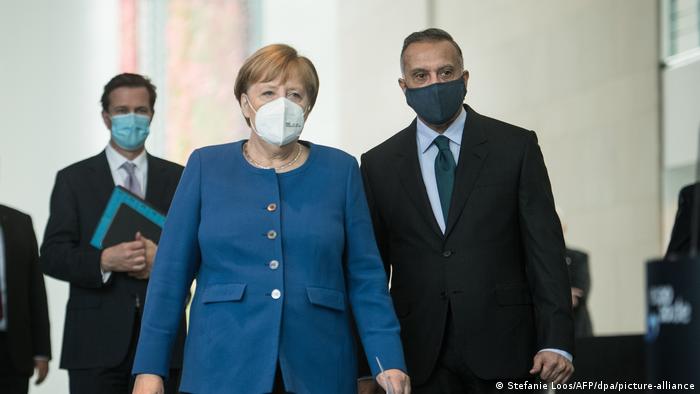 Merkel did not comment on German troop levels in Iraq, but the Bundestag is set to evaluate the question of whether to extend the Bundeswehr mission in Iraq by the end of the month. German troops based in Iraq are providing logistical support and training for Kurdish fighters, but are not taking part in offensive strikes.

"The 'Islamic State' remains a threat to the region and of course beyond," Merkel said, emphasizing that Germany would continue to support Iraq both within the framework of the anti-IS coalition and a NATO mission training Iraqi security forces.

Currently, the German government is supporting the construction and equipment of makeshift clinics in the country.

Prior to his trip to Berlin, al-Kadhimi met with French President Emmanuel Macron in Paris, where the two also discussed the fight against terrorism.

Macron expressed his support for Iraq's sovereignty and highlighted that Iraq's main challenges were Islamic extremism and foreign interference in its affairs, in allusion to Iran.

The French president also mentioned that he welcomed more investment in infrastructure projects, such as French group Alstom's plans to support a Baghdad metro project.

Al-Kadhimi is also set to visit the United Kingdom as part of his European tour, where he has roots in the country. Having fled Iraq in the 1980s, first for Iran, he spent a short time in Germany before settling for many years in the UK and ultimately taking on British citizenship.

Iraqi MPs meeting in emergency session to resolve the crisis in the southern city of Basra have called for a clampdown. But the Prime Minister Haider al-Abadi faces revolt in parliament over his handling of the crisis.

The German development minister, Gerd Müller, says Germany and Iraq will step up cooperation on the reintegration of Iraqi refugees. He said up to 10,000 Iraqis would be helped to return home.