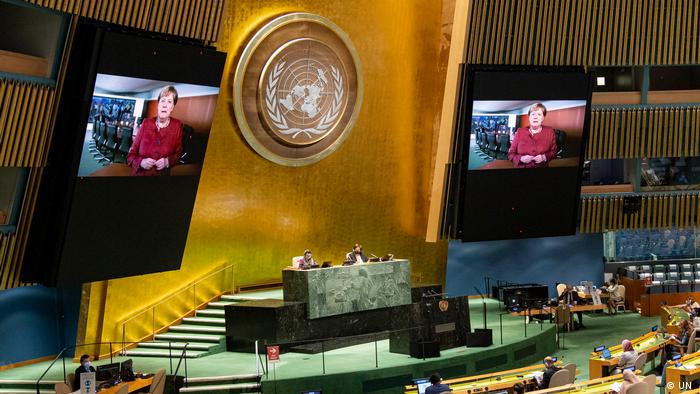 German Chancellor Angela Merkel told a virtual UN General Assembly on Thursday that there is still "a long way to go" on women's rights.

Merkel and several world leaders took part in a virtual UN General Assembly meeting to commemorate the 25th anniversary of the 1995 women's conference in Beijing.

"Twenty-five years after the Beijing Declaration, equality should be a given. But we still have a long way to go," Merkel said. "Get on board. Let's work together to really target the Beijing goals. The faster the better."

UN Secretary General Antonio Guterres warned of a recent pushback against gender equality and women's rights, which has been exacerbated by the coronavirus pandemic.

"COVID-19 has emphasized and exploited the continued denial of women’s rights. Women and girls are bearing the brunt of the massive social and economic impact of the pandemic," Guterres said from the rostrum in the General Assembly Hall.

"Now is the time to push back against the pushback ... Women's full human rights and freedoms are fundamental to peace and prosperity on a healthy planet."

At the 1995 Beijing conference, 189 countries agreed to prioritize "full and equal participation of women in political, civil, economic, social and cultural life at the national, regional and international levels, and the eradication of all forms of discrimination on the grounds of sex."

Sweden's male national team has pledged to play the remainder of their matches this year without pay. The Swedish Football Association announced the move following harsh criticism over inequality.