The German chancellor faced questions on Brexit, Fridays for Future, and the EU during one of her regular high school visits. But one issue moved the students more than any: Article 13, the divisive new copyright law. 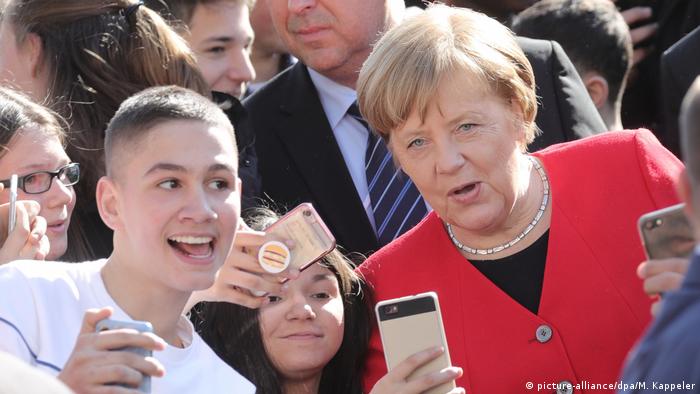 The Thomas Mann high school in Berlin was astir with excitement on Tuesday morning for a special visit from Angela Merkel. Teenagers were roped into helping with security checks, teachers corralled journalists down hallways, and the school's cellphone ban had been suspended just so kids could get the all-important chancellor selfie.

The ostensible purpose of the trip was for the chancellor to inspect the students' world-improving European projects. In this case, their offerings included a small exhibition around a section of the Berlin Wall, which allowed an affable Merkel to recall an anecdote about the relief of a chain-smoking aunt who had gone to West Berlin to buy cigarettes two days before the Wall was built.

But this turned out to be the extent of potential insubordination during the ensuing Q&A, when the largely polite students had half an hour to ask the chancellor a series of questions on everything from the future of the EU, social inequality and the digitization of schools. Some teenagers gave a hollow laugh when the chancellor wondered aloud whether the school was equipped with Wi-Fi.

In fact, Merkel may have even come prepared for a tenser atmosphere, given that thousands of German youths have been going on strike as part of the Fridays for Future protests against her government's inaction on climate change.

Relaxed and increasingly enjoying herself, Merkel comfortably batted away questions about the future of vital ecosystems as they came, after asking for a show of hands of teenagers who had joined the protests. (Fewer than 10 of the more than 200 students in the auditorium raised their hands).

"For me as a politician, this movement is very important. The signal that there is concern is good for us," Merkel said. "It's good that you're pushing us."

Adopting a familiar tactic when difficult questions arise, Merkel drew out the competing interests of business and the environment, which must, she said, be served equally: "On the one hand, we have people worried about their jobs, then there are people worried that driving a car will be too expensive, then there are people who are worried about the climate — we have to bring all that together."

To illustrate the economic interests at stake, Merkel recommended that the students take a trip to the Lausitz region, site of Germany's last remaining brown-coal mines, which are scheduled to be shut down in 2038. "The whole region lives off that, and people are scared they will all be unemployed," she said. "We have to bring all that together."

Merkel spent less time addressing Brexit, with one student worrying about her plans to study in the UK after she finishes high school.

"I believe in European solidarity, but we know that you have to work for it every day," she said. "Now we have seen that Britain's exit isn't that easy. ... I hope there is a solution to how the exit will happen, because, if it is disordered, there will be many uncertainties. We have tried to prepare for these uncertainties. So for example if you are already studying in the UK, and getting your BAföG [German student support], it would continue for now. And we will find regulations so that you can still study in the UK in future." 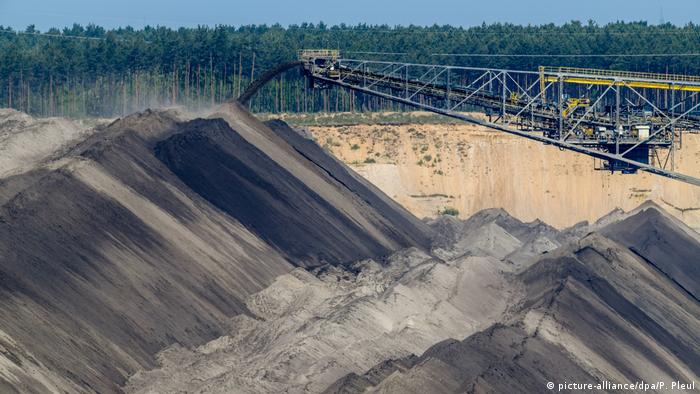 Merkel suggested the students visit one of Germany's lignite mines

Of the many issues raised in the brief event — a young Romanian-Syrian wanted to know how Germany was preparing for a new refugee crisis, one student wanted to know what Merkel was going to do about poverty among old people, and another asked about the US's withdrawal from the INF treaty — only one issue aroused a round of applause among the teenagers: the EU's divisive new copyright regulation, Article 13.

Here again, after noting that gifs and memes were exempt from the rule, Merkel made an effort to strike a balance between those concerned with the freedom of the internet, and the property rights of people who had written uploaded songs, "like the one you just sang to me." "It's really an exaggeration to say this new law means the whole internet will be censored," she said.

Afterward, the students appeared pleased with the chancellor's account of herself. "I thought it was cool that she was so relaxed, the way she did a few jokes," said 16-year-old Karim. "The part at the end about Article 13 really interested me, because I didn't really know about it. She explained it a bit." What was most important for Karim was that "young people could all use their social media."

"I thought it was very interesting that she talked to us," 15-year-old Baturay said. "We have freedom of opinion, and we want freedom about what we post, and I feel like it is being limited."

Then, after offering a farewell with another round of selfies, and receiving a gift of some locally-produced honey, the chancellor was gone, off to Ireland to deal with the EU.

Living Planet: Breaking up with coal in Germany