Angela Merkel calls for solidarity in New Year speech | Germany | News and in-depth reporting from Berlin and beyond | DW | 30.12.2015

Germany's chancellor calls the influx and integration of refugees "tomorrow's opportunity" in her New Year's address. The euro crisis fails to garner a mention, but next year's European Football Championship does. 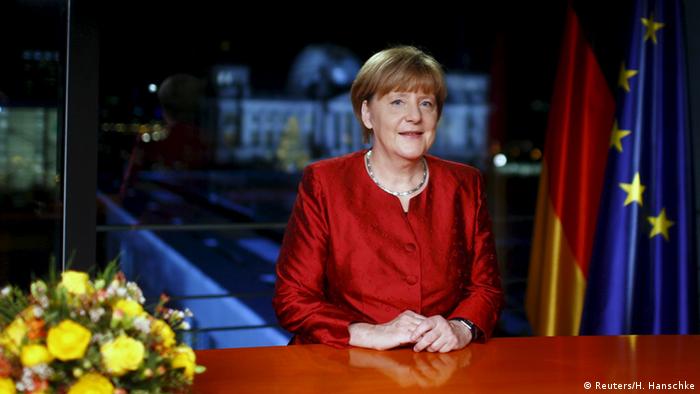 With an eye to the refugee crisis, Chancellor Angela Merkel explains that one thing more than any other will be important for Germany in 2016: "our solidarity."

In her New Year's address she says, "It is important that we not let ourselves be divided - not into generations, not into social groups, and not into those that are already here and those that are new citizens."

People should not follow "those with coldness, or even hate in their hearts, and who claim the right to be called German for themselves alone and seek to marginalize others," Merkel demands, without mentioning Pegida, the organization which roughly translates to "Patriotic Europeans against the Islamization of the Occident," by name. 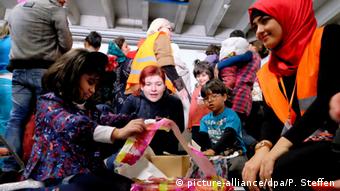 Merkel called the integration of thousands of refugees an opportunity

Germans, she says, must be confident and free, considerate and cosmopolitan. For integration to succeed, they must learn from the mistakes of the past: "Our values, our traditions, our sense of justice, our language, our laws, our rules," she says, apply "to all who wish to live here."

The chancellor stresses that every country that has been successful at integrating newcomers has profited economically and socially. Thus she makes clear that she is counting on a great many refugees remaining in Germany and not returning home. At the same time, she says Germany is working to improve protection of Europe's external borders, to transform illegal migration into legal immigration, and to sustain the fight against the root causes of the refugee crisis in order to attain a long-term reduction in the numbers of new arrivals.

Repeat after me: 'We can do it'

The bulk of the speech is dedicated to the refugee crisis. Merkel makes a point of thanking volunteers and full-time helpers for their "overwhelming and truly moving wave of spontaneous helpfulness." Nonetheless, she says it is clear that the influx of so many people "will demand much of us" in terms of time, energy and money. 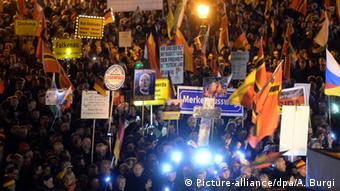 The Pegida movement continued to demonstrate in 2015

In the end, the chancellor repeats her mantra: We can do it, because Germany is a strong nation. Besides refugee aid workers, the chancellor also says she wants to thank the men and women serving in Germany's armed forces from the bottom of her heart for putting their "bodies and lives on the line to uphold our values, our security and our freedom" in the fight against the terror of the self-proclaimed "Islamic State."

Challenges mentioned in her 2015 New Year's address, such as the digital revolution and climate protection, go unmentioned this year, as does the euro crisis. In their stead, Merkel, who is known to be a fan of Germany's national soccer team, makes a point of mentioning the upcoming European Soccer Championship to be held in France, where "our world champions also want to become European champions."

Pegida 'hymn' neck and neck with Adele in German charts

An instrumental piece called "Together we're strong" by German anti-immigrant movement Pegida briefly climbed to the top of the German Amazon charts. But the song has been mocked heavily. (30.12.2015)

President Joachim Gauck's traditional Christmas Eve speech has been released in English. He said Germany had shown itself to be a "kind and caring country" amid the crises of 2015. (25.12.2015)

As Germany prepares to welcome in the New Year, refugees are being informed about the fireworks and festivities. Some psychotherapists believe the explosions could trigger memories of the wars from which they fled. (29.12.2015)