Analysis: Turkish strikes seek to set up safe zones | World| Breaking news and perspectives from around the globe | DW | 05.10.2012

Turkey has justified its military retaliation for the Syrian artillery attack with the need to protect its territory. Observers believe other factors are playing a role. In his first official statement on the deaths of two women and three children during the shelling of the border city of Akcakale by Syrian forces, Turkish Prime Minister Recep Tayyip Erdogan rejected an apology from Damascus. That eight shells hit Turkish ground makes it rather impossible to call this an accident, according to Erdogan. But Turkey is not seeking war, he said, just security on its borders.

That's the official line in Ankara, although Erdogan has by no means the population - or even the entire political scene in Ankara - behind him. In a parliamentary referendum on the Syrian military intervention, there were still 129 votes against. Apart from this, thousands of demonstrators took to the streets in several cities to protest the government's decision.

Observers believe that the government, with its lasting siege of Syrian spots in border areas, is pursuing goals besides its stated national security. Columnist Ismet Berkan wrote in the Hürriyet newspaper that Ankara is seeking to improve the chances of the Syrian opposition through its actions. 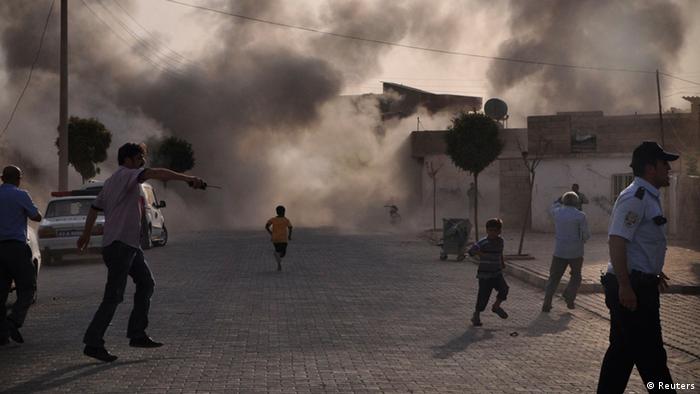 For weeks already, heavy skirmishes have been taking place on the Syrian side of the border near Akcakale. According to media reports, Bashar Assad's artillery groups have retreated 15 to 20 kilometers (9 to 12 miles) inland since the Turkish shelling. Berkan thinks this will make it possible for the Syrian rebels to get the neighboring border region under their control, and being able to better organize supplies from Turkey.

Strikes at other border regions

Ever since the parliamentary vote for Turkish military intervention, any advancing Syrians will have to bargain with other potential strikes along the 900-kilometer (560-mile) border with Turkey. Were Ankara to make good on its threats of further retaliatory strikes, it's possible that there will be ever more ground in the coming weeks from which Syrian government troops are de facto expelled. 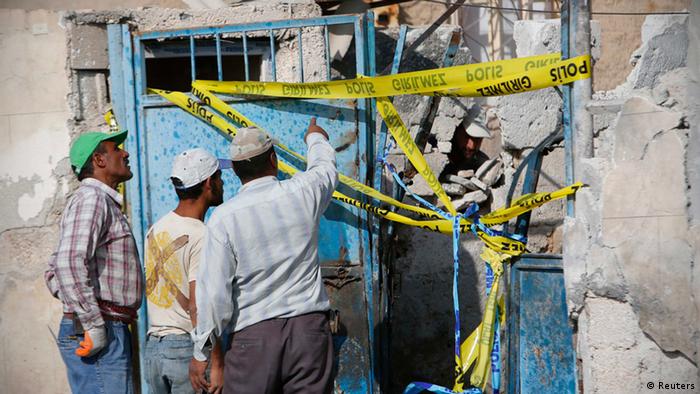 A house destroyed by the Syrian grenade attack in Akcakale

In this way, say observers like Berkan, safety zones can develop in Syrian territory - something which Turkey has long promoted, but which has found little international support. In these unofficial safety zones, Syrian rebels could gather and refugees seek sanctuary, without fear of being attacked by Syrian troops.

By promoting the safety zones, Erdogan may be hoping to accelerate Assad's downfall. The Erdogan administration is convinced that peace and calm could only return to Syria if the president gives up his power. Turkey has an interest in stability - not only as not only Syria's direct neighbor, but also as leading export nation in the Middle East region.

Ankara appears to be avoiding direct military intervention in Syria without Western or Arab support. In this respect, the indirect establishment of safety zones would be beneficial to Turkey. The exiled opposition, with its headquarters in Turkey, has been promoting setting up such zones for a while now.

The crisis in Syria is in danger of drawing in neighboring countries. Despite the Syrian government's immediate apology, the shelling on the Turkish border has led to concerns about possible escalation. (04.10.2012)

After artillery exchanges between Turkey and Syria, Ankara is preparing for conflict and at the same time stating it does not intend to declare war. The West has responded slowly to play down the clash's importance. (04.10.2012)

'Only the Europeans can mediate in Syria'

Syrian legal expert Naseef Naeem says there is little chance of a successful ceasefire in Syria, as the conflict's religious nature blocks easy solutions. Only Europe can successfully negotiate a deal, he says. (02.10.2012)