An Olympic marriage proposal: 'I wanted to show people that love wins'

Rio 2016 has been desperate for more positive headlines, and on day three it got one. A marriage proposal from a manager to a Brazilian athlete caused waves of emotion in the host country. 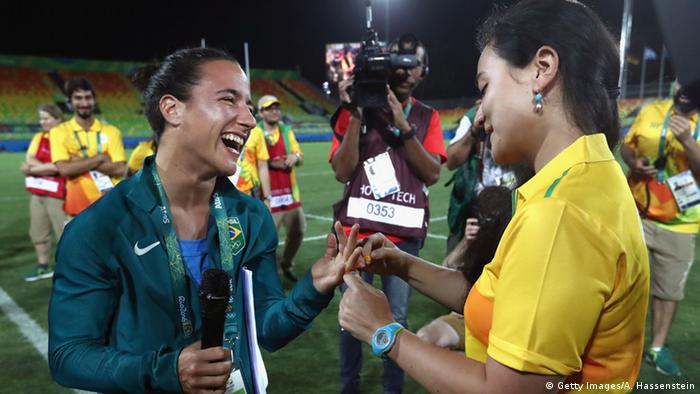 Isadora Cerullo, 25, has become the first athlete to receive a marriage proposal at the Rio Olympic Games. Her girlfriend, Majorie Enya, a manager at Deodoro Stadium where the final of the women's rugby was played, asked for her hand following the conclusion of the match.

Cerullo was a member of the Brazil women's rugby squad that narrowly missed out on reaching the knockout rounds after coming third in their group to Great Britain and Canada.

After being together for two years, Enya gave a heartfelt speech before the couple hugged one another to resounding applause from the watching media, the BBC reported.

"She is the love of my life," Enya told the BBC. "The Olympic Games can look like closure but for me it's starting a new life with someone. I wanted to show people that love wins."

As of 2013, same-sex marriage in Brazil has been legal.

The couple live together in Sao Paulo where Cerullo joined Enya in order to focus on making the women's rugby sevens squad for the Games.

This story is a welcome happy one amid an Olympics marred with poor humanitarian conditions, athletes being sent home and failed drugs tests.

Not only was it the Games' first marriage proposal, but it was also the first time rugby sevens was an Olympic event. Australia won gold, defeating New Zealand 24-17.

On day three of the Olympics, Brazil picked up their first gold, Australia made history in the rugby sevens and Lilly King got the better of bitter rival and controversial Russian Yulia Efimova in the pool. (09.08.2016)

Rugby has been absent from the Olympics for 92 years and rugby sevens has never featured at the Games, making Australia's gold medal win over New Zealand a historic Olympic moment. (09.08.2016)