Amoako Boafo - Pictures in his Head

International collectors are snapping up his paintings. Amoako Boafo is Ghana´s rising star. But how did the fisherman´s son from Accra become one of the world´s most sought-after contemporary artists? A conversation on art between Europe and Africa. 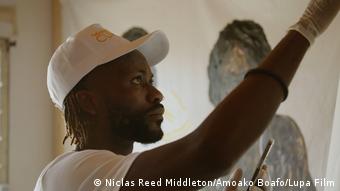 "Actually, my pictures are finished before I even start painting. I create them in my head. I know beforehand what they will become," says Amoako Boafo in an interview. Did he also foresee he would trigger a crazy hype and speculative boom on the art market? Until a few years ago, hardly anyone knew who Amoako Boafo was. Fueled in part by debates surrounding the Black Lives Matter movement, the value of his work on the art market suddenly increased by more than 15 times its estimated price. In February 2020, one of his paintings sold at auction for over 800,000 euros. Another one is in the collection of the Guggenheim Museum in New York. What is the secret behind his success? Amoako Boafo, born in Accra in 1984 to a fisherman and a cook, was an avid tennis player and talented painter from a young age. Torn between his two passions, he opted for art. After training at the Ghanatta College of Art and Design in Accra, in 2014, he was offered an opportunity to study in Europe, at the Academy of Fine Art in Vienna. In the Austrian capital, the Western African art student encountered the works of 20th century Viennese modernism, the European Art Nouveau. These would a lasting influence on him. Inspired by the art of his two idols, Gustav Klimt and Egon Schiele, Amoako Boafo began to paint masterful, intense, sensual portraits. 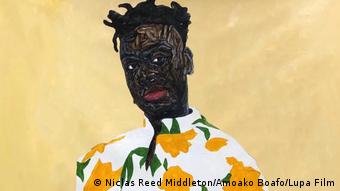 He paints the faces of his figures directly onto the canvas with his fingers. He portrays exclusively Black people, surrounded by colorful designs, and has developed a new, unmistakable style. The fashion world is also crazy about his patterns. Kim Jones, head designer of French luxury label Dior, asked him to design the 2021 summer collection. Amoako Boafo has risen to the Mount Olympus of art in a very short time and is one of the few Ghanaian artists to have done so. 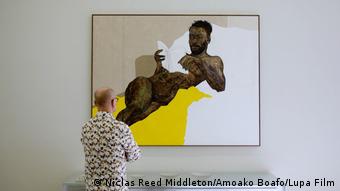 Now he wants to help other young artists from his country, and set up an art school in Accra: "I think that's what I got from Vienna,” says Amoako Boafo in an interview with DW. "In Ghana, we all learn how to paint, we master the technique. But we don´t learn how to communicate and how to critique and share with each other to get better. That´s what I want to facilitate here." Though he´s one of the most sought-after artists of the moment, Amoako Boafo knows that success on the art market is walking a fine line, and how important it is to have a good network. Arts.21 meets the popular artist in private, in his studio in Accra and in Vienna´s Museumsquartier.

International collectors are snapping up his paintings. Amoako Boafo is Ghana´s rising star. But how did the fisherman´s son from Accra become one of the world´s most sought-after contemporary artists?

African artists’ creations shape the continent’s diverse creative tapestry. We meet them in Congo, Ghana and Nigeria, where they bring their ideas to life.