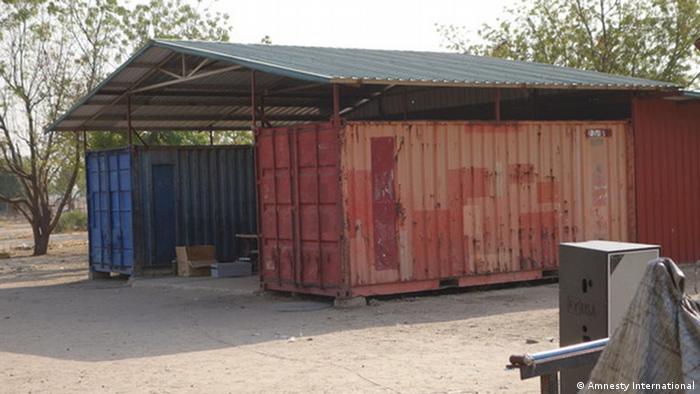 Amnesty said on Friday that its researchers had recently interviewed more than 42 witnesses of the container killings and visited the site, a Catholic Church compound, in the South Sudanese town of Leer.

"Government soldiers arbitrarily arrested dozens of men and boys in Luale village and Leer town. They then forced them, with their hands tied behind their backs, into one or more shipping containers at the Comboni Catholic Church," the report said.

"Civilian and military officials had direct knowledge that the detainees were in distress and dying but did nothing to help them," Amnesty said. "Witnesses described hearing the detainees crying and screaming in distress and banging on the walls of the shipping container, which they said had no windows or other form of ventilation."

Government soldiers later used a truck to dump bodies in two open pits approximately one kilometer (two-thirds of a mile) from Leer. Relatives later found decomposing remains and skeletons strewn across the ground.

UN Secretary General Ban Ki-moon is in South Sudan where he will try and revive a fragile peace deal to end a civil war. Both government and rebels are under pressure to settle their differences. (26.02.2016)

Four years after gaining independence, South Sudan should be a country of hope but its people are on the edge of starvation. Analysts blame warring parties for the lack of political will to end a two-year civil war. (14.12.2015)

Sudanese president Omar Bashir has ordered the borders with South Sudan to be reopened for the first time since the 2011 secession. Loyalist and separatist forces waged a 22-year war before South Sudan's split. (28.01.2016)

UN: rapes and abductions as battle rages in South Sudan

Gunmen in South Sudan torched towns and looted aid groups during the latest government offensive toward the rebel stronghold of Leer, UN officials and diplomats have said. Aid agencies are pulling out of the region. (12.05.2015)

Some armed militias affiliated with government forces "raided cattle, stole personal property, raped and abducted women and girls," according to the report's authors, who visited South Sudan between October and January. 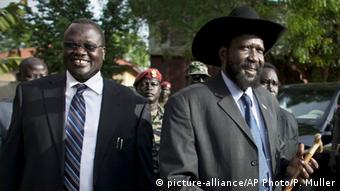 A power struggle between President Salva Kiir (right) and his deputy, Riek Machar (left), led to the conflict

In some cases, parents had been forced to watch their children being raped, the UN body said. Last year, within only five months, 1,300 rapes cases were reported.

"This is one of the most horrendous human rights situations in the world," concluded UN human chief Zeid Raad al-Hussein, "yet it has been more or less off the international radar."

Zeid recommended that the UN Security council expand sanctions already in place by imposing a "comprehensive arms embargo" and referring the situation to the International Criminal Court if other judicial means failed.

Amnesty demanded in its report that the African Union Commission use South Sudan's August 2015 peace agreement to set up a "hybrid criminal court" to prosecute suspects.

South Sudan erupted into civil war in December 2013, barely two years after winning independence from Sudan. The conlict stemmed from a falling-out between President Salva Kiir and his deputy, Riek Machar.

Pollutants such as lead and barium had been found in hair samples from 96 residents in Leer as well as the localities of Koch and Nyal.

The areas have changed hands several times during the civil war and lie in the watershed of the White Nile River and the swamplands of the Sudd, one of the world's largest wetlands.