The rights group has reported 23 instances of torture committed by security officials. Tunisia's prime minister is to meet with Germany's Angela Merkel this week to discuss a deportation deal for rejected asylum-seekers. 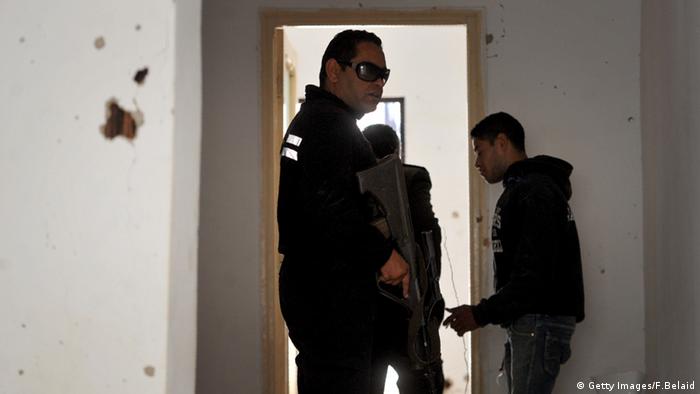 The rights group Amnesty International fears that democratic reforms in Tunisia are being undermined by a rise in "brutal tactics" used by the country's security forces.

A report published by the rights group on Monday "exposes how entrenched impunity has fostered a culture in which violations by security forces have been able to thrive," Amnesty's North Africa research director, Heba Morayef, said.

The chancellor said in her weekly video podcast that she would push the Tunisian prime minister to help speed up deportations. She referenced the case of the Tunisian terrorist Anis Amri. (11.02.2017)

As Tunisia confronts the possibility of jihadists returning home, the country is divided. Some believe that the returning fighters should be rehabilitated, others argue they should be stripped of their citizenship. (27.12.2016)

Titled "An End to the Fear: Abuses Under Tunisia's State of Emergency," the report details 23 cases of torture and ill treatment committed by the police, the National Guard and counterterrorism brigades in the past two years.

Victims quoted in the report said they had "[been] brutally beaten with sticks and rubber hoses, placed in stress positions such as the 'roast chicken' position or forced to stand for prolonged periods, subjected to electric shocks, deprived of sleep or had cold water poured on them."

One victim told Amnesty that his legs and feet were beaten until his toenails fell off.

Living under the threat of terrorism

Since the 2011 revolution that ousted President Zine El Abidine Ben Ali and sparked the Arab Spring, Tunisia has been hit by a series of attacks. In the past six years, Islamist assailants have killed more than 100 soldiers and police, around 20 civilians and 59 foreign tourists. The country has been under an ongoing state of emergency since a November 2015 attack killed 12 presidential guards.

The report described "Tunisian security forces' reliance on the brutal tactics of the past, including torture, arbitrary arrests, detentions and restrictions on travel of suspects as well as harassment of their family members."

"The chilling accounts detailed in this report signal a disturbing rise in the use of repressive tactics against suspects in terrorism-related cases over the past two years, providing a grim reminder of former President Ben Ali's rule," Amnesty reported.

Amnesty also expressed concern over travel bans imposed on at least 5,000 people, which officials say are designed to prevent selected young people from joining extremist groups such as the "Islamic State" abroad.

"There is no doubt that the authorities have a duty to counter security threats and protect the population from deadly attacks, but they can do so while respecting the human rights protections set out in the Tunisian constitution and international law," Morayef said.

Germany and Tunisia in talks over migrant deportations

On Friday, German Chancellor Angela Merkel called for faster deportations of rejected Tunisian asylum-seekers and reiterated her push to classify Tunisia, along with regional neighbors Algeria and Morocco, as a "safe country of origin." She has also pledged to help Tunisia cope with the threat of extremism and help rebuild its economy.

The issue has become a point of urgency following the December terror attack on a Berlin Christmas market. The perpetrator, Anis Amri, was a Tunisian refugee whose deportation was delayed by Tunisia's initial reluctance to confirm that he was one of its nationals. He went on to kill 12 people and injure 56 others in the truck attack.

Amnesty's report will leave a shadow hanging over this week's talks and could have a major bearing on how Germany proceeds with its deportation policy.

Immigration and deportations are expected to be among the key issues concerning voters ahead of Germany's general elections in September.