Allegations of Taliban bribery stoke debate on Afghan engagement | World | Breaking news and perspectives from around the globe | DW | 19.10.2009

Allegations that Italy paid the Taliban not to attack its troops in a region of Afghanistan have caused outrage. Some analysts, however, say the practice of direct local funding may be an alternative to prolonged war. 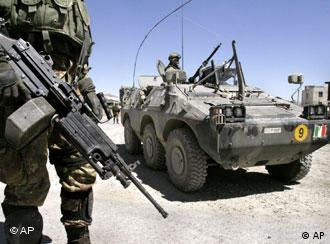 A report published in The Times newspaper last week claimed that Italian forces operating in the region around Sarobi, 64 kilometers (40 miles) east of Kabul, had bribed Taliban warlords not to attack their troops.

The British newspaper carried statements from a Taliban commander who claimed the Italians paid tens of thousands of dollars in a deal which allegedly meant Italian troops would not step on territory the Taliban controlled - and, in return, the militants would not attack.

"We were told that our high-rank commanders met with the Italian soldiers and they agreed a deal that neither side should attack one another," Mohammad Ismayel, a mid-level local Taliban commander, known simply as Commander Ismayel, told The Times. "We were informed at that time that we should not attack the NATO troops."

However, when the Italians pulled out in July 2008, they allegedly neglected to mention the arrangement to the French troops taking over - and did not inform the warlords of the changing of the guard. As a result, a more aggressive French approach caused anger among the Taliban leaders who believed that the Italians had reneged on the deal. 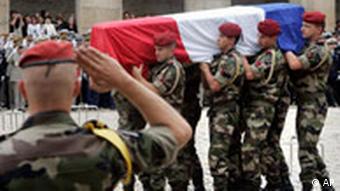 It is claimed French troops died because the deal was unknown

Within a month of the handover, the Taliban had killed 10 French soldiers and injured 21 others in the area. The result was an escalation of fighting in the region with many of the Taliban leaders linked to the Italian deal killed in the subsequent NATO surge and by hit squads from the French Special Forces.

The Italians issued strong denials with Defense Minister Ignazio La Russa calling the allegations "complete rubbish" and the office of Prime Minister Silvio Berlusconi refuting claims that any official policy of engagement with the Taliban exists. French military sources also denied the allegations, despite rumors of an angry response toward the Italians from the Élysée Palace. 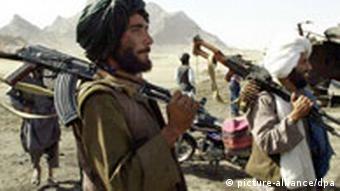 The Taliban gets funding from a number of Gulf states

While some defense analysts believe that this could be far from an isolated case, others believe that focusing on the allegations surrounding the Italians clouds a debate which is growing louder; that of directly engaging with local warlords in an attempt to end what is looking increasingly like an unwinnable war.

"While this story does have a credible sound to it, it doesn’t really matter if it's true or not," Giles Merritt, the director of the Brussels-based think tank Security & Defense Agenda, told Deutsche Welle. "The main issue is that this is precisely what the West should be doing anyway. There is a strong argument for paying off the local leaders and warlords. Afghanistan is desperately poor and needs money, and the Afghans are going to get money from anywhere they can. Right now, about $100 to $400 million a year (66.9 million - 267.7 million euros) is coming into the Taliban war chest from Saudi Arabia and other Gulf states."

Merritt believes the West should be the main power contributing to the local Afghan economy and should also be buying up the opium crop, making it into morphine for use in western medicine. This, he says, would dilute outside influence and create a much more positive effect than having thousands of Western troops, which are now seen as an occupying power, on the ground.

Concerns over directly funding the Taliban

He concedes that there would be huge political problems arising from this approach, however, with evidence that a lot of the money flooding into local Afghan communities ends up in the hands of the Taliban. While the structure of Afghan society and government makes determining who is actually receiving funds terribly difficult, Merritt believes that this should not be used as a reason to ignore this potential strategy. 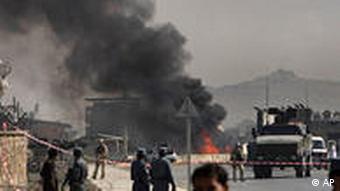 NATO forces are engaged in a difficult asymmetric war

"Who is the Taliban, who is a local warlord and who is al Qaeda?" asked Merritt. "The borders are so blurred. It is one of the biggest mistakes being made in Afghanistan that we're still dealing in very black and white Western terms. Afghanistan is not organized this way. The war is being fought as a conventional conflict between central governments, but there really is no central government. That is why dealing locally with the leaders at that level is the best option."

Merritt believes that, despite the idea sounding out-dated and colonial, an approach closer to the British strategy of the early last century could be the most effective.

Current strategy based on false impression of conflict

"The Brits knew that people wouldn't stay bought for long," he said. "So they paid regular small amounts to the local leaders and if there was an uprising or insurrection, they would cut the funding, launch a heavy attack and then resume payment once the uprising had been quelled. It sounds old-fashioned but it is becoming clear that this is an unwinnable war with the current strategy. Do we go on spending millions and taking heavy losses, while detablilizing an entire region, or do we look for an alternative such as direct engagement?"

The number of foreign troops in Afghanistan has increased steadily since 2001. Currently there are more than 100,000 soldiers in the country. President Obama is currently mulling over whether to send in more troops. (07.10.2009)

Berlusconi wants to pull Italian troops out of Afghanistan

Italy mourns the deaths of six soldiers killed in Afghanistan

Italians are mourning the deaths of six soldiers killed by a suicide bomb in the Afghanistan capital of Kabul. They were part of the US-led mission in the country to protect voters in national elections. (18.09.2009)