Algerian athlete Fethi Nourine and his coach have withdrawn from the judo competition at the Tokyo Olympics to avoid facing an Israeli athlete. The decision was made in support of the "Palestinian cause." 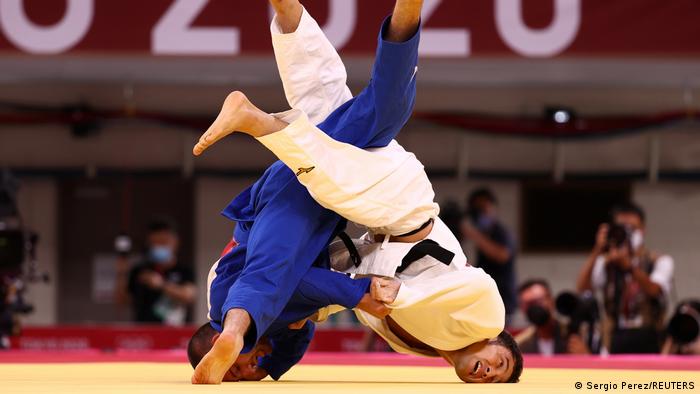 The International Judo Federation confirmed on Saturday that Algerian athlete Fethi Nourine and his coach have withdrawn from the judo competition at the Tokyo Olympics to avoid facing an Israeli athlete.

In a statement, the IJF said Nourine and coach, Amar Benikhlef, "gave individual statements to media announcing their withdrawal from the competition to avoid meeting an Israeli athlete during the event."

"We worked a lot to reach the Olympics, but the Palestinian cause is bigger than all this," the 30-year-old Nourine told Algerian television. His statements were backed by Benikhlef, who admitted they had "not been lucky with the draw. We got an Israeli opponent and that's why we had to retire. We made the right decision."

The federation said both were temporarily suspended after an investigative commission "confirmed all the facts." It added that the case was assigned to its disciplinary commission for "further investigation, judgement and final sanctioning beyond the Olympic Games."

The Algerian Olympic Committee withdrew accreditation for both Nourine and Benikhlef and "plans to send them home, applying sanctions accordingly," the IJF statement said.

Nourine, who was due to take part in the under-73-kilogram event, has previously pulled out of other judo competitions to avoid Israeli opposition — most recently at the World Championships in Tokyo two years ago.

The phenomenon of Israeli athletes facing boycotts due to their nationality is not new. At the Tokyo Olympics, international judo was hoping to outline the progress made, but have now been hit by another public setback.

The comments by the two Algerians "are in total opposition to the philosophy of the International Judo Federation. The IJF has a strict non-discrimination policy, promoting solidarity as a key principle, reinforced by the values of judo," the federation said.

Athletes from other countries such as Egypt and Iran have also previously refused to compete against Israelis, with the story of Saeid Mollaei the most high-profile. Mollaei has since defected to Mongolia and could face the Israeli in question, Sagi Muki, in the semi-finals of the men's -81kg at Tokyo 2020.

Mollaei: 'I cannot return to Iran'