They're generating menacing images, and can be a serious environmental threat: Algae are spreading across the Baltic, depleting the oxygen which plants and animals need to survive, but how bad is the situation really? 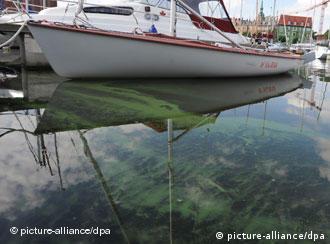 Reaching the shore: Algae in the harbour of Stralsund

High temperatures, light winds and an absence of waves: Every year in summer algae get comfortable in the Baltic Sea, floating on the surface, shining green and blue - and suffocating aquatic life.

This year it seems especially bad. The affected area is almost the size of Germany and even visible from outer space. It appears like a gigantic foul-smelling carpet, 377 000 square kilometers in size, spreading from Finland to the German-Polish border and to the island of Ruegen.

It is the biggest algae explosion since 2005.

A combination of farming and weather 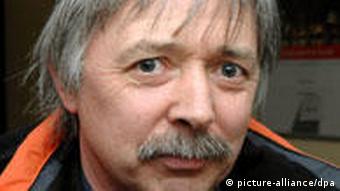 The WWF says current conditions are 'perfect' for algae growth

It's not just the sunny weather which is driving the bloom. It's also the large quantity of phosphorus in the water.

"Over-fertilization is the biggest environmental problem facing the Baltic," said Jochen Lamp from the World Wide Fund for Nature (WWF) in Hamburg. The phosphates are being washed off farmland and from rivers into the Baltic Sea.

WWF has criticized countries bordering on the Baltic for their disjointed response to the problem. On the one hand they seem eager to reduce over-fertilization, on the other they encourage farmers to use more fertilizers.

Sweden for example has abolished its tax on fertilizers and in the North-Eastern part of Germany, in Mecklenburg-Western Pomerania, farmers are now allowed to manure their land within a meter of dikes and creeks - it used to be seven meters.

Algae cause death zones in the water

Algae blooms can be disastrous for ecoystems, causing dead zones under water. They suck up the oxygen, leaving none for plants and animals.

"This is especially bad for fish, crawfish, starfish and crabs living in the ground. Their lives are severely affected and in the worst case they die," says Wera Leujak, specialist for oceanic security at the German Federal Environment Agency.

The Baltic Sea already has quite a number of these dead zones, but the algae exacerbate them.

For humans, the blue-green algae are unhealthy as well. They can cause skin rashes, allergic reactions or diarrhoea and damage the liver.

The blue-green algae bloom can even be seen from space

Yet despite a media uproar in Europe this week, the situation is not that much worse than normal.

On Thursday, a research ship took water samples from the Baltic Sea on the west coast of Ruegen. "At least for this area, we can give the all-clear," said Harald Stegemann, head of the State Environmental Office for Mecklenburg-Western Pomerania in Guestrow, who initiated the operation.

"The samples looked like tap water and the colleagues on board didn't see any algae carpets, although we expected it to be different."

On other parts of the Baltic Sea algae are visible. "There are these tiny little algae floating around and colouring the water green and yellowish," said Thomas Merck.

He works on the small island of Vilm near Ruegen and has lived there for a couple of years now. "Speaking from experience, all I can say is: It just happens regularly." 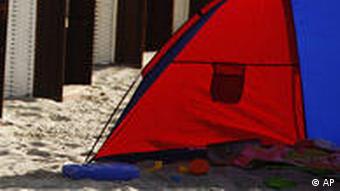 So far, beaches have stayed open - with a bit of rain the algae may even disappear.

For this reason, local scientists are reluctant to join the hysteria. Of course the area looks huge on satellite images.

"But the important question is: Is it just a film of two or three millimeters or is it a real carpet of two or three centimeters?" Stegemann explains. For him, it does not seem to be very dramatic, though he concedes that sufficient data has not yet been gathered to dismiss the problem out of hand.

In any event, the carpet may well disappear during the next few days anyway:

"If it cools down, if it gets stormy, if it rains, the water will intermingle and it's all over," Stegemann said.

With global fossil-fuel reserves slowly running out, a search for replacement energy sources is underway. Some scientists believe that a hi-tech method of farming algae could provide a solution. (07.04.2010)