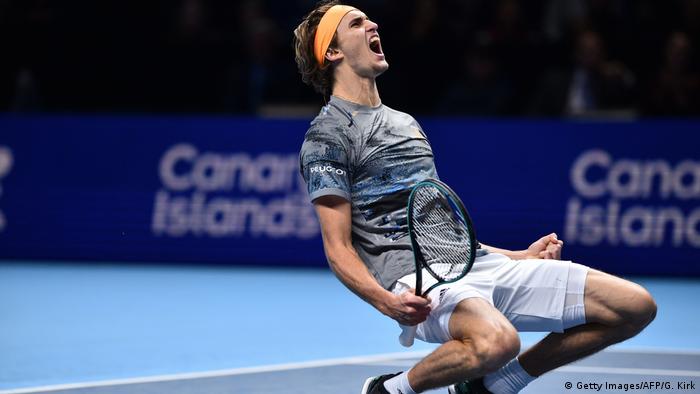 Alexander Zverev secured the last semifinal spot at the ATP Finals on Friday — eliminating Rafael Nadal in the process.

The defending champion beat already eliminated Daniil Medvedev 6-4, 7-6 to finish second behind Stefanos Tsitsipas in the group and set up a semi-final against Dominic Thiem.

Earlier, Nadal stayed in contention by digging deep to beat Tsitsipas 6-7, 6-4, 7-5 for his second win of the round-robin stage.

But Zverev's victory left him, Nadal, and Tsitispas with identical 2-1 records — with the top-ranked Spaniard eliminated based on the tournament's ti-breaker rules.

Medvedev (0-3) had only pride to play for against Zverev and was broken in the opening game. The Russian largely held his own after that but couldn't force a single break point and double-faulted to go 5-3 down in the second-set tie-break. Zverev converted his first match point with an ace.

Tsitsipas will face six-time champion Roger Federer in the first semi-final on Saturday. The Greek had already secured a semifinal spot by winning his opening two matches but still pushed Nadal to the wire in a match that lasted nearly three hours.

That effort could cost him against Federer, who needed only 1 hour, 13 minutes tobeat Novak Djokovic in his final group-stage match on Thursday and spent Friday resting up.