An appeal to the Supreme Court by the prominent conspiracy theorist Alex Jones has been turned down without comment. He is facing a defamation lawsuit for claims that the Sandy Hook shooting was a hoax. 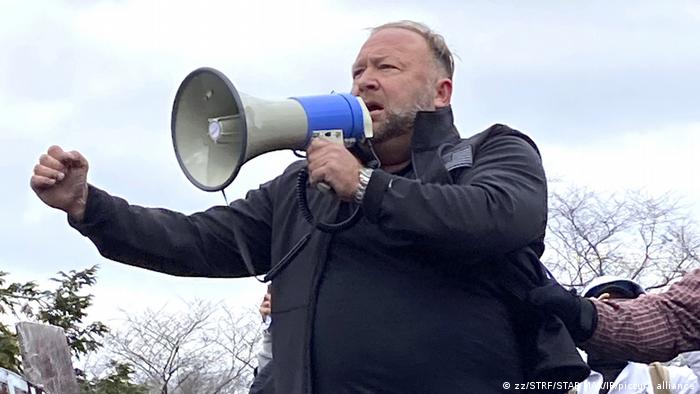 Alex Jones is an outspoken conspiracy theorist with a large following

The US Supreme Court gave short shrift to an appeal by Infowars host Alex Jones on Monday, declining even to give it a hearing.

Jones was trying to fight a court sanction imposed as he faces a defamation lawsuit brought by relatives of some victims of the 2012 Sandy Hook Elementary School shooting in Newtown, Connecticut.

A court trial judge penalized him in 2019 for angry remarks he made on his web show directed at an attorney in the case.

In an email to The Associated Press, Jones' attorney, Norman Pattis, called the Supreme Court decision "a disappointment," saying his client was being penalized for exercising his right to free speech.

The court sanction was imposed after Jones vented accusations on his show in 2019 against an attorney for the families, Christopher Mattei.

He accused Mattei of planting material showing child sex abuse that was found in email metadata files that Jones turned over to lawyers conducting the lawsuit against him.

The language he used was adjudged by the court to be threatening in nature, with Jones speaking of "total war" and putting a head on a pike.

The Connecticut Supreme Court later upheld the sanction for the same reason.

Sandy Hook families are suing Jones and his show for claims that the shooting at the school, in which 20 children and six educators died, was a hoax aimed at bringing about changes in US gun laws.

They say followers of Jones have harassed them and sent them death threats since the claims were made.

Jones has since said he believes that the massacre did indeed occur.

With material from The Associated Press.