Alenka Bratusek: ′We can solve our own problems′ | Europe| News and current affairs from around the continent | DW | 02.05.2013

In an interview with DW, Alenka Bratusek, Slovenia's first female prime minister, explains how she plans to deal with ailing banks and avoid becoming the "next Cyprus" - all without EU help. 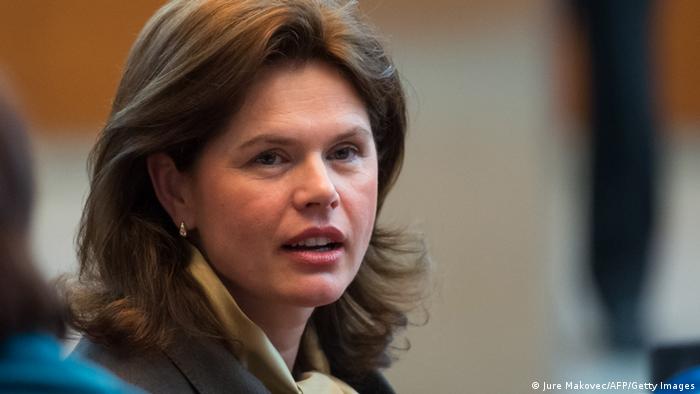 Alenka Bratusek is Slovenia's first female head of state. For weeks, her country, a member of the eurozone, has been labeled the "next Cyprus." Just six weeks ago, her center-left Positive Slovenia Party replaced the conservative party by a narrow a margin. Her task is to ease the burden ailing banks are having on her country of two million people. Three of Slovenia's largest credit institutes are owned in part by the state.

DW: For a long time, Slovenia was considered a model student when it came to the EU's eastward expansion. Now it's being labeled as something of a "black sheep." How can that be?

Alenka Bratusek: I don't think Slovenia's a black sheep. Admittedly, we are in a difficult situation at the moment, but we know exactly what has to be done. There are two key projects that we're going to implement this year, and next year as well. The first is a recovery for our economy, and [the second] a consolidation of our finances. The most important part for us will be the revival of our banking system, so that the banks can finance the economy again.

You'd also like to balance the budget through privatizations. With such a skeptical market, how do you see that happeningt? Not too long ago, the Belgian KBC Bank unloaded its shares in Slovenia's partially-state-owned NLB Bank due to unhappiness with that investment.

The NLB is a special case with respect to the KBC's decision to pull out. That has more to do with the KCB'S own problems. That bank received government support in Belgium and had to pull out of some of its own investments. I believe that when some of our banks have recovered, they'll become all the more interesting for foreign investors. I've said that repeatedly that, regardless of how things develop, one of the partially-state-owned banks will be put up for sale.

You're working at creating a "bad bank." But, at the same time, you have to refinance seven billion euros' ($9.2 billion) worth of government bonds in June. How do you intend to do that?

That bad bank was just established, and it's up and running. From our perspective, we'll be able to shed a portion of our banks' non-performing loans by June. Just two weeks ago we were able to carry out a 1.1-billion-euro treasury bill sale - that's not a small sum. As a result, we were able buy more time so that we could hold a new public bond auction in relative calm. I'm absolutely confident that this plan will succeed.

But these bills have a maturity of 18 months, and their sale was carried out within your own country - that is, via your own banks. Against that backdrop, why are you so convinced that Slovenia won't become the next Cyprus?

I have to make it clear here that there's a big difference between banks in Slovenia and in Cyprus. The Slovenian banking system is much, much smaller than Cyprus, and Slovenia isn't a tax paradise - and it has an export-oriented economy.

Slovenia's economic strength is indeed in its mid-sized companies. But it's exactly these companies that are suffering most under an ailing banking sector and a credit freeze. How will you counteract that?

Through the recapitalization of our banking system. That's the highest priority for us, and it's on our agenda every single day. We have to make sure that the credit freeze unwinds so that we can help those mid-sized companies. They're the motor and the driving force behind the Slovenian economy, and must have access to credit. We're working on that 24 hours a day, seven days a week.

Wouldn't it be easier to ask for help from the EU, IMF and ECB?

No. I'm sure that we can demonstrate to Europe and to financial markets that we can solve our own problems ourselves. I'm convinced that that's the better path for everyone - for our people and for the economy. It's better to take that path on our own, without the Troika.