Al Qaeda's Syrian branch, the Nusra Front, has released 16 Lebanese policemen and soldiers as part of a prisoner swap. The return of the body of a Lebanese soldier was also part of the deal. 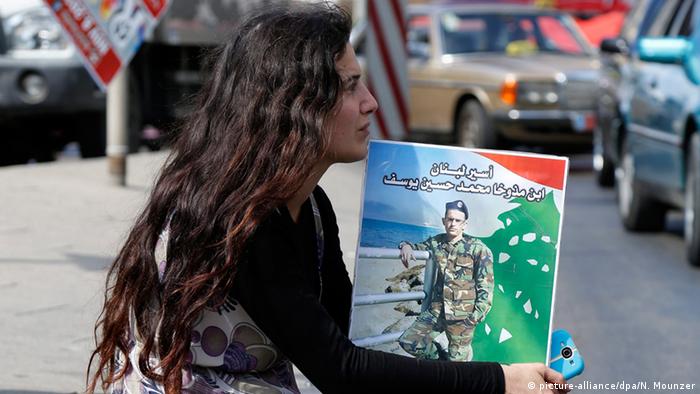 Television footage obtained by the Qatar-based Arabic news channel Al-Jazeera on Tuesday showed the Nusra Front release 16 captives. The exchange was part of a prisoner swap deal brokered by the Gulf nation of Qatar.

A number of insurgents were seen in the video, bringing the Lebanese captives to the pre-arranged meeting point outside Arsal, a Lebanese town near the Syrian border. The hostages were seen being handed over and later boarding one of the waiting Red Cross vehicles. Masked Nusra Front fighters watched the exchange from nearby rooftops, making sure that the swap went according to plan.

The body of one executed Lebanese soldier was also handed over as part of the agreement. Lebanon's National News Agency said that Mohamed Hamieh's body was released in the first stage of the deal.

Relief felt across Lebanon - however momentary

Families and friends of the abducted security personnel started cheering and dancing as news of the release was made public.

"My happiness is beyond description," said one of the Lebanese policemen after he was brought to the meeting point on the edge of Arsal.

The Nusra Front had abducted 29 soldiers and policemen in Arsal in 2014 after overrunning the town alongside the "Islamic State" (IS) group for a short period. Four of the soldiers have been killed in captivity, and a fifth soldier died after sustaining wounds.

The self-styled "Islamic State" has refused so far to negotiate on the remaining nine of the captives it still holds. But with many aspects of the civil war still spilling over from neighboring Syria, Lebanon also announced that it was willing to "negotiate" with IS to secure the release of the remaining service personnel.

Lebanese side of the deal: IS leader's ex-wife

There were no clear details on the identities and numbers of prisoners that Lebanon had agreed to release in the secret exchange deal. However, one of the captives was identified as the ex-wife of Abu Bakr al-Baghdadi, the leader of IS. A senior Lebanese security official, speaking on condition of anonymity, confirmed the woman's identity to the Associated Press news agency.

Al-Dulaimi was seen boarding an SUV at the meeting point in Arsal alongside some of her children, one of whom she had given birth to while in captivity. Al-Dulaimi had been arrested in Lebanon in 2014, charged with travelling into Lebanon on falsified documentation.

Asked what she wanted to do after the release, a fully veiled al-Dulaimi said that she planned to live in Turkey. She appeared, however, to be somewhat guarded about her association with Baghdadi:

"They say that I was the wife of al-Baghdadi. I don't know, we have been divorced for six or seven years," she told Al-Jazeera.

The Shiite Hezbollah movement, allied to the Syrian regime, has confirmed a six-month truce deal with Sunni rebels in three Syrian towns. The deal entails the transfer of thousands of civilians across the frontlines. (26.09.2015)