Hours after the announcement of a US-Russia-brokered ceasefire deal aimed at ending the five-year conflict in Syria, fighting has escalated. Nearly 100 civilians have been killed in airstrikes. 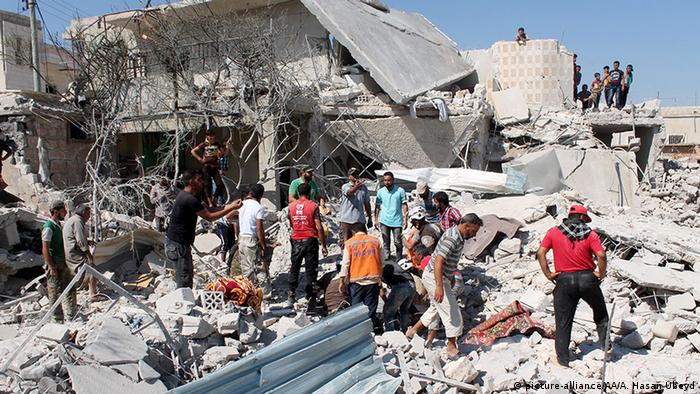 The UK-based Syrian Observatory for Human Rights on Sunday - a day ahead of an agreed ceasefire - reported that at least 62 civilians had been killed in rebel-held Idlib after warplanes bombed a marketplace in the northwestern city.

In Aleppo, the Syrian army launched attacks on rebel-held areas in a bid to maximize gains ahead of the "cessation of hostilities," which begins at sundown on Monday for the Muslim holiday Eid al-Adha.

US Secretary of State John Kerry and Russian Foreign Minister Sergei Lavrov have revealed the latest ceasefire plan for war-torn Syria. Not even a day after the announcement, doubts have emerged.

The Syrian government has "approved" the US-Russian truce aimed at ending the five-year war in the Middle Eastern country, said the state news agency. The Syrian opposition also expressed optimism about the agreement. (10.09.2016)

"The fighting is flaring on all the fronts of southern Aleppo," said Captain Abdul Salam Abdul Razak, a rebel spokesman of the Nour al-Din al Zinki Brigades, which form part of the Free Syrian Army (FSA). At least 30 people were killed in the attacks, according to the Observatory.

Turkey's military also said Sunday that its warplanes had killed at least 20 "Islamic State" (IS) jihadists in northern Syria. Turkish President Recep Tayyip Erdogan renewed his pledge to destroy IS in Syria and the threat the militant group poses to his country.

The Chief of General Staff's office said in a statement that warplanes had struck three buildings identified as belonging to the IS group.

The uptick in violence follows the announcement earlier Saturday of a ceasefire deal, brokered between the US and Russia after lengthy talks in Geneva. Under the agreement, Moscow will pressure the Syrian government to end its military campaign against US-backed rebels.

In exchange, the US will launch joint military operations with Russia against the rebranded Jabhat Fatah al-Sham, formerly known as the al-Qaeda affiliate Nusra Front, if the ceasefire is observed for a minimum of seven days.

"This requires halting all attacks, including aerial bombardments, and any attempts to gain additional territory at the expense of the parties to the cessation. It requires unimpeded and sustained humanitarian access to all of the besieged and hard-to-reach areas, including Aleppo," said US Secretary of State John Kerry.

The government of Syrian President Bashar al-Assad has made no official comment on the agreement. Instead, Syrian state media said the government offered its approval of the deal, citing private sources.

Basma Kodmani, of the Saudi-backed opposition alliance High Negotiations Committee (HNC), said the group is cautious of the agreement, adding that there needed to be mechanisms to ensure the "enforcement of the deal."

Last month, Ankara sent its tanks across the Syrian border to help anti-government rebels retake Jarablus, a key IS-held border town, and to contain the expansion of a Kurdish militia. Since then, Turkish jets have carried out several airstrikes against IS targets.

The Syrian conflict erupted in 2011, when government forces launched a violent crackdown on pro-democracy protesters calling for Assad to step down. More than 250,000 people have been killed and more than half the population displaced in five years, according to UN figures.