Airbus has ordered engine software checks on the A400M military aircraft following the recent fatal crash of one of its new troop and cargo carriers. The request reportedly came after the discovery of a software bug. 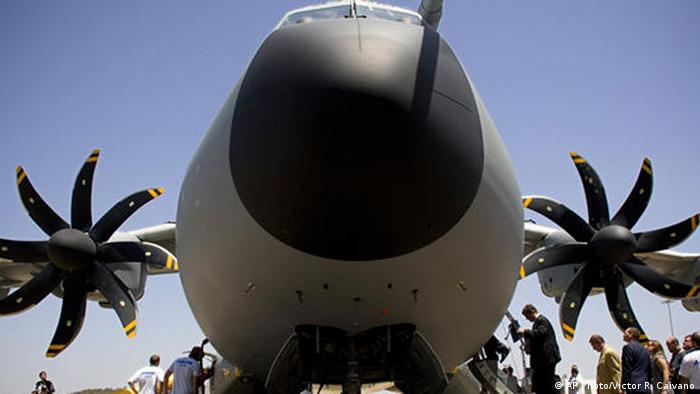 The European aerospace company Airbus on Tuesday warned of a technical bug potentially affecting the engines of its A400M military plane.

The company said in a statement it had sent out an alert to its clients urging them to carry out "specific checks of the Electronic Control Units (ECU) on each of the aircraft's engines."

"It is a precautionary measure which is part of our continued airworthiness activities," an Airbus spokeswoman said.

The ECU controls the engines and is part of a number of software systems that were partly blamed for earlier delays and cost overruns in building the new aircraft.

The potential flaw was reportedly uncovered during checks carried out by Airbus itself, made independently from an official investigation into the crash of an A400M cargo plane in Spain 10 days ago. Four crew members were killed when an A400M crashed near Seville on May 9 during a pre-delivery flight test.

No clear evidence yet

The crash prompted five countries - Spain, Britain, Germany, Turkey and Malaysia - to ground their planes. France, which has six of the A400M planes in active operation, said it would only carry out the most pressing flights until more details emerged on why the military aircraft went down.

One person familiar with the Airbus findings told the news agency Reuters on Tuesday that preliminary evidence appeared to suggest a "quality" problem rather than a fundamental design flaw. Investigators were expected to focus on whether a faulty device had been fitted without adequate verification.

Another person quoted by Reuters said the fleetwide checks were intended to find out if any more serious flaws had slipped through the thousands of hours of flight testing.

"The cause of the crash will only be discovered if Airbus's findings are being matched with the data from the flight data recorder," a military expert asking not to be named told Reuters.

However, no clues have so far emerged from the flight recorder because the black-box data is being kept under wraps by a Spanish judge.

The A400M is a large, propeller-driven transport aircraft that was launched in 2003 to respond to the needs of seven NATO members - Belgium, Britain, France, Germany, Luxembourg, Spain and Turkey. Malaysia joined the effort in 2005. A total of 174 planes have since been ordered by the eight nations.

The plane was developed at a cost of 20 billion euros ($22.2 billion), making it Europe's largest defense project. Its 12-wheel landing gear allows it to land on soft and rough airstrips as short as 750 meters (2,500 feet).

However, problems in developing the engines, and particularly in certifying the engine control software, contributed to three years of delays, requiring an injection of fresh cash into the project by governments in 2010.

The crash in Spain came amid new delays in fitting the aircraft with military systems and raised further questions over the timing of deliveries after Spain suspended pre-delivery test flights.

The crash of the Airbus A400M in Seville will delay the delivery of the transport plane yet again. It's a further setback for the troubled aircraft project that raises questions about pan-European collaboration. (12.05.2015)

Shares in European aerospace giant Airbus have dropped more than 4 percent after the weekend crash of an A400M military plane in Spain fueled investors' concern over Europe's largest and hugely delayed defense project. (11.05.2015)

At least four people died when a plane believed to be undergoing a military trial flight crashed near Seville airport in Spain. Two people reportedly survived the crash, while several others remain unaccounted for. (09.05.2015)