Airbus Grapples with Delay of A400 Military Transport Plane | Business| Economy and finance news from a German perspective | DW | 17.10.2007

Airbus Grapples with Delay of A400 Military Transport Plane

European aerospace group EADS announced on Wednesday, Oct. 17, the delay of its military transport plane by at least six months. The announcement comes after EADS delivered its jumbo A380 over a year behind schedule. 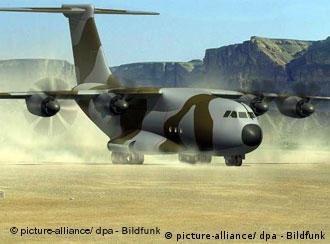 EADS, Airbus' parent company, said Wednesday that slow progress in the development of computer software for controlling the A400's engine would delay the military transport plane's delivery by at least six months and possibly as much as one year.

The first A400Ms -- giant, four-engine turboprop planes -- to the French air force "are now expected to start six months later than initially planned with a risk of a further slippage of up to a half year," the European Aeronautic Defense and Space Company said in a statement.

The company said the changes in the schedule would affect A400M deliveries to both European and other nations. The plane is now due to makes its first flight in the middle of 2008, according to EADS.

Financial impact to be announced soon 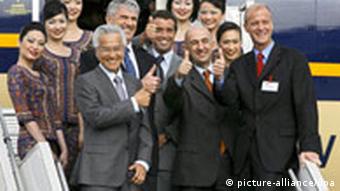 Airbus celebrated the A380 delivery to Singapore Airlines on Oct. 15

The A400M is Europe's largest military industrial project and was launched by seven countries in May 2003.

EADS has already written a provision of 352 million euros ($498 million) into its accounts to deal with the delays and would address the delay's complete financial impact in an upcoming earnings release.

The A400 was developed at twice cost of the A380 and, according to contract, delivery delays will prompt automatic penalties, Reuters reported.

Confirmation of the A400 setback came just days after the European plane maker was able to celebrate the delivery of its A380 superjumbo -- the world's largest passenger plane -- to Singapore Airlines more than a year behind schedule.

Airbus fired the first shots Monday at the Paris Air Show, a key battleground for the European plane maker and its US rival Boeing, with news of big orders from Middle Eastern and American clients. (18.06.2007)

A former top manager in the Airbus aircraft group has rejected renewed suggestions that he made a fortune illegally by selling shares, knowing that the company was in deep trouble. (30.05.2007)

The recently agreed upon Russia-European aerospace partnership has boosted sales of Airbus jets, but closer ties between the Kremlin and Airbus parent EADS could hurt the aircraft maker's Pentagon prospects. (01.04.2007)

What do you think about the new delays announced by EADS? Send us an e-mail. Please include your name and country in your reply.

DW-TV: Suppliers Relieved A380 Finally Off the Ground