In 2010, the rail network in the EU is set to be liberalized, allowing more companies to offer international train routes. Air France-KLM, Europe’s largest airline, is hoping to use this development to its advantage. 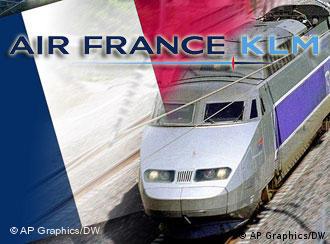 Air France-KLM are putting their business on rails

Air France-KLM, Europe's largest airline, wants to get even bigger by entering the high-speed train market by 2010. An Air France spokesperson told German television station ARD that they were planning to form a strategic partnership with the transport firm Veolia. The goal is to be able to offer high-speed train service when the rail network in the European Union is liberalized in 2010.

The project had been in the air for some time and the two companies signed a confidential draft agreement at the end of June, the newspaper Aujourd'hui France reported. The diversification amounted to a "change in flight direction for Air France" which was responding to "the difficult position of airlines for journeys of less than three hours."

The two companies had already contacted French group Alstom, which makes the TGV high-speed trains for the SNCF, because they were interested in a new generation of train developed by Alstom called the AGV. The new company is hoping to purchase several AGV trains, which can reach a maximum speed of 350 km/h (217 mph), to run between Paris and London and Paris and Amsterdam.

This is not the first partnership between an airline and a rail company. Deutsche Bahn, which operates Germany’s national rail network, has been working with German airline Lufthansa for several years.

Chancellor Angela Merkel's cabinet has approved plans to let private investors take over just under one quarter of the operations of Deutsche Bahn, one of the world's biggest rail transport groups. (01.05.2008)